Leo and Emmanuel: the start of something beautiful?

Macron and Varadkar are the EU’s ‘new leaders’. Do they really agree on its future? 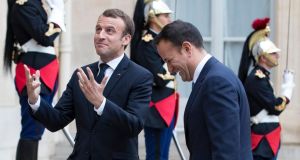 When Taoiseach Leo Varadkar and President Emmanuel Macron met at the Élysée Palace this week they congratulated each other and themselves for taking on the role of dynamic young leaders of Europe. “Thank you for your visit Leo Varadkar,” Macron tweeted. “Our generation has the duty to relaunch Europe.”

Varadkar practically purred when Macron spoke first in the glittering Salon Murat after their hour-long meeting. “With Leo I have a partner, an ally, a European decisionmaker who wants to go forward, to give more ambition to Europe,” Macron said.

In less than six months in office Macron has proven his credentials as the ideas man and driving force behind a renewed European Union. He has delivered several major speeches on the subject, the most important at the Sorbonne on September 26th.

Varadkar came to office three weeks after Macron but has yet to explain his vision of Europe.

On the day of Varadkar’s visit Macron made a major stride in his quest for a “social Europe”. Social affairs ministers voted to modify the posting-of-workers directive, introducing the principle of equal pay for equal work in EU law.

Concerns about “the Polish plumber” undercutting the French labour market were a major reason why the French rejected a proposed constitution for Europe in 2005, effectively killing the project and its ambitions for closer integration.

Varadkar is pro-Europe, but he may prefer the old-style EU, where heads of state and government take all important decisions

Macron attributes the rise of Donald Trump and the Brexit vote to the unbridled globalisation and competition that have lowered standards of living in the United States and Europe.

“Free trade and unfair competition, against the interest of its people, is in the DNA of the European Union,” says the far right-wing ideologue Florian Philippot, a former vice-president of the French National Front.

That perception has fuelled the rise of the Front National and other populist, anti-EU parties across the continent. That is why Macron is trying to blunt the EU’s sharp capitalist edges.

Free trade and competition are also in the DNA of Fine Gael. Varadkar is pro-Europe. He rightly sees the EU as a source of prosperity and a multiplier of Irish influence. But he may prefer the old-style EU, where heads of state and government take all important decisions.

Varadkar told Macron repeatedly that he wants Ireland to help bring about change in the EU. He gave his interlocutors the strong impression that he intends to be part of what Macron calls “the vanguard, the heart of Europe”.

For one thing Ireland supports Macron’s plan for “democratic conventions” to ask the citizens of the union what kind of future they want. Minister of State for European Affairs Helen McEntee has already discussed plans with her French counterpart, Nathalie Loiseau. “The French acknowledge that we have a provenance in this area,” says an Irish official, alluding to past Irish forums.

Germany and Italy have also expressed interest in the conventions, which are supported by the European Commission and by the president of the European Council, Donald Tusk. But Ireland is the first to have committed to the idea.

It will be easy for Varadkar to support dialogue with citizens, and other Macron initiatives, such as a “European Ivy League” and European agencies for disaster relief or digital innovation. Varadkar likes Macron’s proposals for co-operation on migration and defence. Protection of farming continues to cement the Franco-Irish alliance, at present in negotiations with the Latin American Mercosur trading bloc.

It becomes more difficult when Ireland’s economic interests could be threatened by Macron’s advocacy of social and fiscal convergence. Last month Macron promoted an initiative to tax internet giants on the basis of earnings in each country, rather than on profits channelled to countries with low corporate tax rates, including Ireland.

Limiting damage from Brexit is the Taoiseach’s main focus. But he might take a lesson from Macron in refusing to allow it to dominate the European agenda

The Élysée points out that 19 of 28 EU members have expressed interest in Macron’s proposals for digital taxation. That’s far short of unanimity, but it signifies a qualified majority, should the voting system change.

Ireland and other small, liberal EU economies that have welcomed digital companies want the Organisation for Economic Co-operation and Developmentto settle the question, not the EU. They argue that digital taxation is a global issue, which is true, but referring it to the OECD is also a way of stalling for time.

When Varadkar defended the argument at the Élysée he was “clear in his messaging, as he had been at the council, without being remotely confrontational. He deported himself confidently,” said an observer.

Macron and Varadkar have so far managed to prevent tax issues from spoiling their budding alliance. In his Sorbonne speech Macron had threatened to withhold EU funds from countries that undermine European “solidarity” by refusing to raise corporate-tax rates. For the time being that option, like the threat of an Irish veto, has been set aside.

Varadkar is valiantly defending Ireland’s interests in the Brexit process. That was an integral part of his conversation with Macron. Limiting damage from Brexit is obviously the Taoiseach’s main focus at the moment. But as he embarks on talks with other potential Irish allies he might take a lesson from Macron in refusing to allow Brexit to dominate the European agenda.

The goal of Macron’s drive for social and fiscal convergence is to halt the race to the bottom, to strengthen the union and improve the lives of its citizens. Varadkar’s interlocutors thought he could be persuaded. That could be a positive side effect of Brexit.

1 Taoiseach dramatically sacks Barry Cowen as minister over drink-driving controversy
2 Miriam Lord: What the actual...? Martin blooded as Taoiseach after he wields axe on Cowen
3 Covid-19: Ireland likely faces ‘imminent second wave’ due to reopening, experts warn
4 Michael McDowell: Brace yourself for what a desperate Trump might do
5 Chilean student ‘happy to be free’ after being detained for nearly two weeks in Mountjoy
Real news has value SUBSCRIBE