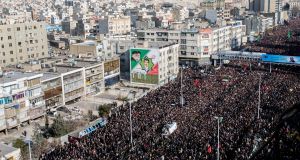 The coffin of Gen Qassem Suleimani is carried by truck through Tehran, Iran, on January 6th during his funeral procession. Photograph: Arash Khamooshi/The New York Times

A man who attacks a hornets’ nest in an enclosed space may boast that he carries a big stick, but he risks being stung to death.

We’ve heard predictions of Iranian attacks on Gulf shipping and civilians. Iran is more likely to retaliate in kind. According to the New York Times, Ali Khamenei has told advisers that retaliation should be carried out openly by the Iranian military, not by proxies or militias as in the past.

Suleimani’s assassination has made the 41-year conflict between the US and Iran direct, immediate and exceedingly dangerous. An overt attack by the Iranian military would be an act of war.

A Libyan official was the only person ever convicted for the Lockerbie bombing. Yet in Beirut, where I lived from 1988 until 1996, the word on the street was that Lockerbie was carried out by the Popular Front for the Liberation of Palestine – on general command of the Iranians – to avenge Iran Air flight 655.

Nine months after the downing of the Iranian Airbus, a pipe bomb exploded under a minivan in California. It was driven by the wife of Captain Will Rogers III, who gave the order to fire the missiles that downed the Iranian Airbus. Mrs Rogers was not hurt. The perpetrator was never identified.

US president Donald Trump precipitated the downward spiral in US-Iranian relations in May 2018 by renouncing the 2015 nuclear accord known as the Joint Comprehensive Plan of Action. He then determined to destroy Iran’s economy.

Twice this week Trump threatened to commit war crimes by attacking Iran’s cultural sites, and through “disproportionate” reprisals for any Iranian reaction. In an ironic twist, Iran portrays itself as upholding international law. Iran’s information minister Mohammad Javad Azari-Jahromi this week called Trump “a terrorist in a suit”.

After Trump pulled out of the nuclear accord, Tehran scaled down its observance of the deal. When Suleimani was assassinated Iran said it would no longer limit the number of its centrifuges or the level of uranium enrichment. Yet it continues to allow inspections by the International Atomic Energy Agency.

US and Iran: A vexed relationship VIEW NOW

On Sunday, Shia members of Iraq’s parliament passed a non-binding resolution demanding the departure of the remaining 5,200 US troops from their country.

Adel Abdul-Mahdi, Iraq’s caretaker prime minister, complained to the UN Security Council that the US violated Iraq’s sovereignty by assassinating Suleimani, a “friendly” military commander, and his Iraqi deputy.

Trump responded spitefully, in typically transactional fashion, saying Iraq would have to pay for the US’s “extraordinarily expensive air base”, and threatening a putative ally with “sanctions like they’ve never seen before”.

Trump could not even pronounce Suleimani – who he called “Solly Manny” – correctly. But he is not the first US leader to display ignorance and sloppiness of staggering proportions in the Middle East.

Just a few months before he invaded Iraq, George W Bush did not know that there are two sects in Islam, Sunni and Shia, according to US author and former diplomat Peter Galbraith.

It was obvious that overthrowing Saddam Hussein would empower Iraq’s persecuted Shia majority, whose leaders lived in exile in Iran. As Iraqi Sunnis told me bitterly after the invasion, the US “handed Iraq to Iran on a golden platter”.

In the early 2000s, I covered battles between US forces and Shia militias in Sadr City, Baghdad. There was one militia then, Mehdi’s Army. Today there are 30 to 50 under an umbrella group called the Popular Mobilisation Forces.

Trump reportedly ordered the assassination after seeing these militias overrun the US embassy in Baghdad on television. He thus confirmed his image as a modern-day Caligula: reckless, impulsive, wantonly setting fire to the Middle East.

That view of Trump was written between the lines of UN, Nato and EU reactions calling for “restraint” and “de-escalation”.

UN secretary general António Guterres said: “Geopolitical tensions are at their highest level this century. And this turbulence is escalating.”

Nato secretary general Jens Stoltenberg dissociated the Atlantic alliance from the assassination by stressing that it was “the decision of the US, not of the [anti-Islamic State (Isis)] coalition or of Nato”.

How long, one wonders, will world leaders be able to maintain their polite silence regarding Trump’s erratic behaviour?

Suleimani’s assassination is the greatest US blunder since the 2003 invasion of Iraq.

Until the US invaded Iraq, Iran’s only foothold abroad was a sliver of Lebanese territory where Hizbullah created a state within a state

In just five days it has all but ended the possibility of preventing Iran from obtaining nuclear weapons, led the US state department to advise its citizens to leave several Muslim countries, and rallied millions of Iranians around a regime that was the object of furious protests only weeks ago.

The US-led coalition that was created to fight Isis has ceased operations to enable it to focus on protecting personnel in Iraq. Numerous commentators speculate that Isis could re-emerge as a result of Suleimani’s killing.

The US looks likely to be driven out, in humiliation, from the country it liberated from Saddam Hussein in 2003. The US has since lost more than 4,500 American lives there, and squandered trillions of dollars.

Until the US invaded Iraq, Iran’s only foothold abroad was a sliver of Lebanese territory where Hizbullah created a state within a state.

Suleimani was the architect of Iran’s regional expansion. If the US leaves Iraq, Iran will reign supreme over the “Shia crescent” from the Caspian Sea to the Mediterranean, with perilous consequences for America’s Israeli and Sunni Arab allies.