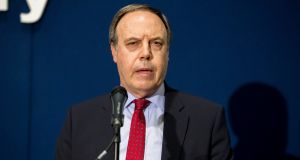 The headline story of the UK general election in Northern Ireland was the loss of Belfast North by DUP deputy leader Nigel Dodds to Sinn Féin’s John Finucane.

Behind this set-piece battle between unionism and nationalism, the story across Northern Ireland was a dramatic continuation of the Alliance surge at the expense of the unionist and nationalist blocs.

The DUP lost one-sixth of its voters and Sinn Féin almost a quarter, with anti-Brexit pacts explaining only a tenth of republican losses.

Alliance more than doubled its vote to become the North’s third-largest party, and the second-largest in many heartland unionist constituencies.

Overall, unionist parties took 43 per cent of the vote, down from 49 per cent at the last general election in 2017.

Nationalists took 40 per cent, down from 42 per cent. The centre bloc of Alliance and Greens took 17 per cent, up from 9 per cent . The Greens absented themselves from their entire electoral heartland last week due to pacts, so should be worth another 2 per cent to the centre in future elections.

Northern Ireland’s political system can now be seen as a 4-4-2 of unionist, nationalist and other, where all the momentum is with other.

Alliance’s vote grew dramatically in council and European elections this May but Westminster’s first-past-the-post system tends to sideline all but the two largest parties, which in Northern Ireland tends to exacerbate polarisation.

There were also questions over whether Naomi Long’s party would be punished by Remain voters for opting out of anti-Brexit pacts.

On Thursday, Alliance significantly surpassed May’s results, either by vote share or total votes. Even in Belfast North, its support doubled. Northern Ireland’s electorate has demonstrated a determination to grow the centre that has defied the brutal logic of set-piece Westminster battles.

Partly this is because the election was about more than Westminster. After three years without devolution, a strong message was being sent to get back to Stormont - as was the case in May’s council and European polls.

Ironically, the only type of election in which voters have not had a recent chance to this message is an assembly election. Avoiding a drubbing in such a contest is one more reason why the DUP and Sinn Féin are suddenly in a rush to restore power-sharing.

The DUP’s backing of Brexit has often been characterised as retreating into a fantasy of Britishness. Its disastrous mishandling of the issue at Westminster has demonstrated arrogance, incompetence and intransigence.

Sinn Fén has had its own version of these flaws. A leading faction within the republican movement clearly had a unification fantasy of making Northern Ireland magically disappear by withdrawing from its political institutions.

Both fantasies have now been tested to destruction at the ballot box. People want functioning government and co-operative politics, regardless of their wider constitutional objectives. This has major, positive implications for the management of Brexit and political change in Northern Ireland over the coming years.

As a sea border emerges with Britain, rewards will flow to unionists that seek to mitigate it, rather than to wave flags against it.

As new constitutional futures are discussed, rewards will flow to nationalists who plan rather than plot. Sinn Fén’s drubbing last week was, among other things, a rejection of its endless calls for a border poll.

If the British and Irish governments do not nurture this desire for peaceful change, history will just them harshly.

The new political balance emerging in Northern Ireland is not quite a three-legged stool. Unionism’s moderate party, the UUP, enjoyed a small rise last week but this was a dead cat bounce. Disaffected unionists are switching straight to Alliance, bypassing a UUP that is only moderate in parts.

The DUP has responded with its usual call for unionist unity, suggesting a future of one DUP-led bloc that can only drive more voters towards Alliance.

There are insufficient signs even now the DUP has learned the lessons of the past three years. Leader Arlene Foster insists she has no reason to step down; Brexit spokesperson Sammy Wilson is still claiming his party can block a sea border at Westminster.

These positions are delusional.

Nationalism has given its moderate party, the SDLP, a second chance. Having lost all three of its Westminster seats in 2017, the SDLP has gained two of them back - one from the DUP and the other from Sinn Féin - both with thumping majorities.

Only Alliance bettered the SDLP’s improved vote share. In the three-bloc future of unionist, nationalist and other, nationalists will retain a meaningful choice of parties.

‘Others’ may acquire a choice if the Greens develop their potential. But unionist voters unhappy with DUP-style politics will have no choice other than to cease voting unionist, as appears to have happened to one in seven of them last week.

That may be where the new system is most dangerously unbalanced.

4 Róisín Ingle: The gin is now part of my daily routine