Cliff Taylor: The Irish economy is in a sweetspot but it will not last 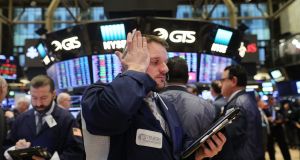 Traders work on the floor of the New York Stock Exchange in New York City, the US, during this week’s stock market wobble. Photograph: Spencer Platt/Getty Images

There is one certainty behind all the heebie-jeebies on the stock markets this week. Interest rates are heading higher. All the debate about where share prices will go next is set against this backdrop. The extraordinary period of cheap money engineered by world central banks to get us out of the economic crash is coming to an end. This has been clear for quite some time – the mystery is why investors chose this particularly week to take fright.

The stock market action has been concentrated across the Atlantic because they are ahead of us in the economic cycle. US base interest rates are already up at 1.5 per cent, whereas ours remain at zero. European rates will follow American ones higher.

The Bank of England warned this week that further rises in rates in the UK could come more quickly than expected. The ECB probably won’t make the first move until next year, but the trend in the US shows us that once interest rates start rising, they tend to keep going. We are watching the long goodbye to the era of super-low borrowing costs.

For Ireland, this is part of a wider story. The Irish economy is now in the most extraordinary sweetspot. The US economy is storming ahead, the UK hasn’t suffered as much as expected after the Brexit vote and the euro zone economy is doing very nicely. Crucially, despite strong euro zone growth, interest rates remain on the floor as the ECB tries to make sure that some kind of economic normality returns after the crash.

We saw the results of all this when the European Commission published its latest economic report this week. Irish GDP grew by 7.3 per cent last year, it estimated, compared with a euro zone average of 2.4 per cent. Even making the “funny money” adjustment for the activities of multinationals, the domestic economy here probably grew by 5 per cent plus.

This week was the one where investors worldwide started to wake up to the fact that the era of free money really was coming to an end. And to worry that, just as the actions of the central banks during the crisis were unprecedented, no one is quite sure what the reversal of these measures will mean. What will the “new normal” look like? For a country as exposed to the international winds as Ireland, this is important.

Is what happened in the markets this week a sign of trouble ahead in the US economy and internationally? Shares would have to drop a good deal further to have an impact on economic confidence.

If this does happen, it looks likely to be triggered by people who borrowed money to bet on the markets running into more trouble. Some funds, for example, had borrowed cheap cash and put on bets – because this is betting, not investing – that the market was going to stay calm.

Even some of the brightest market participants say it is unclear how far the market is exposed to this kind of leveraged investing, much of it tied up in opaque funds.

For Ireland, the market wobbles are a sign that the ideal international economic backdrop we have benefited from won’t last forever.The US is now in the eighth year of economic expansion and while the Trump tax cuts may add some fuel to the fire, the cycle will turn at some stage.

Add in concerns over Brexit – where the talks between the EU and UKare now in trouble – and threats from US- and EU-led corporate tax moves and you can see how the current rosy scenario could start to wilt.

Of course there is little point in fretting about everything – even if preparation is important, particularly in complex areas like Brexit. And our current strong economic position, together with the positive short-term outlook, provides a solid base. The EU predicts growth here will be a healthy 4.4 per cent this year.

But whatever about preparing for things that might happen, it would not be clever to ignore things that almost certainly will. It is clear this week that fears that the world economy would lapse into a deflationary period after the crash are now well and truly behind us. US long-term market interest rates could soon top 3 per cent and short-term rates could be at 2.5 per cent by the end of the year, or early next year.

Inflation remains below target in Europe, but the odds on ECB rates starting to rise next year are shortening all the time. And in advance of this, long-term market rates, and the cost to Ireland of borrowing, will rise too. In all the trumpet-blowing about the new Government capital investment plan due out shortly, and the goodies to be dispensed in next October’s budget, we need to remember this.

We have a national debt of €200 billion and are still adding to it, albeit slowly. We do have some cash on the other side of our national balance sheet – and the remaining bank shares. But with the interest rate cycle turning, it would surely be foolhardy not to get the exchequer finances back into the black as soon as possible and to start putting aside some more cash for a rainy day, along with making the key investments we need.

When even the smartest investors in the world are struggling to make sense of what is going on, it is not clever to try to forecast the future. But most now agree on one thing – interest rates are heading higher and this is going to change the way the world looks over the next few years.

1 We need to pay very close attention to what is happening in Britain now
2 Irish tourists excluded from visiting Greece as country begins its tourism season
3 Remaking Ireland: Five positives from the pandemic
4 Connell losing touch with the club championship is the real tragedy of Normal People
5 Police officer ‘kicked in the face’ while clearing crowd from beach
Real news has value SUBSCRIBE