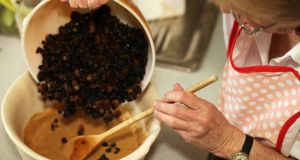 Tomorrow is “Stir-up Sunday”, after which your handiwork will have the requisite four weeks to mature. Photograph: iStock

Not many people make their own Christmas puddings any more, but if you’re the sort of traditionalist who still does, you’ll probably also know that this weekend is the time to do it. Tomorrow, more specifically: “Stir-up Sunday” as it’s known in England, after which your handiwork will have the requisite four weeks to mature.

The date has roots in religion, because according to Brewer’s Dictionary, it is also by tradition on this Sunday that Anglican churches read a prayer known as the collect, which starts: “Stir up, we beseech thee, O Lord, the wills of thy faithful people.”

This humorous convergence of food and faith must have inspired many a homily down the decades. As for the culinary part, the proper way to stir the pudding is clockwise, with a wooden spoon, and with everybody in the family lending a hand.

Stir-up Sunday has nothing to the with its next-door neighbour in the phrase dictionaries, “Stirrup Cup”. That’s a whole different tradition, from the parting glass given to travellers on horseback. If you didn’t have a horse and spoke Irish, it was “deoch an dorais”.

But as for pudding makers, those who go to all that trouble would surely be excused a swig of whiskey or whatever goes into the mixture. So maybe “Stir-up Cup” is a thing too.

Alas most of us don’t do enough home cooking these days. In fact, whenever I hear the word “stirring” now, the first thing that comes to mind is people annoying other people on social media.

Sure enough, a search for the words “stir” and “up” on Twitter this weekend reveals little in the way of puddings and plenty about the British general election and Brexit. One tweet included the word “boiling” too, yet even that wasn’t about puddings. It was about increased political tensions in Belfast, where it’s Stir-up Sunday every week.

In a rather different calendar, meanwhile – the old French revolutionary one, which abolished all references to religion in favour of celebrating the rural economy– - I see that this Sunday (4 Frimaire) would have been dedicated to the medlar: a fascinating and controversial fruit of whose existence I was entirely ignorant until about an hour ago.

I now know it featured in this newspaper’s gardening column a while back, and that our correspondent noted then how “many writers, including Shakespeare, Chaucer, Saki, Cervantes, and Colette mention it”, although she tastefully didn’t say why.

Part of the tomato-sized but brown-skinned fruit’s notoriety derives from the fact that around this time of year, almost overnight, it turns from being hard and unripe to soft and apparently rotten.

Then there is also its shape, after ripening, one of the politer descriptions of which is “cul de chien” (“dog’s arse”).

This and other interpretations of its appearance also made it very popular among bawdy Elizabethan writers, the fruit making a cameo appearance in Romeo and Juliet.

Here, from my copy, is how Mercutio uses it to mock Romeo: “Now he will sit under a medlar tree,/And wish his mistress were that kind of fruit/As maids call medlars when they laugh alone./Oh Romeo, that she were, O that she were/An open et cetera, thou a pop’rin pear.”

Yes, it really does say “et cetera” there, although a real-life Mercutio would surely have said something else. As for what he meant, that subject also came up some years ago elsewhere in these pages, in the late Diarmaid Ó Muirithe’s Words We Use column.

He had been asked about the fruit by a reader who found it in one of her old recipe books – and it sent Diarmaid searching through Eric Partridge’s cult 1947 book on bawdy Shakespeare. Partridge confirmed, delicately, that Mercutio was referring to the female “pudend”. As for “pop’rin pear”, that was a reference to the combined male private parts, and more. As Partridge added: “Shakespeeare, who delighted in treble innuendo, was probably [also] punning on ‘pop her in’.”

Oh dear. He’d let you down sometimes, the same Shakespeare. And not for the first time, he has also just uncomfortably reminded me of the Falstaffian Boris Johnson, a man who will hardly be making his own Christmas puddings this Sunday.

On the contrary, Johnson has elevated convenience food to be the defining metaphor of his election campaign, suggesting repeatedly (and spuriously) that his Brexit deal is microwave-ready and that all voters have to do now is “pop it in”.