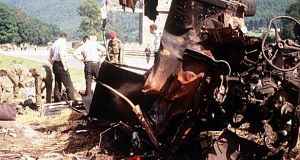 Warrenpoint in August 1979 when 18 British soldiers were killed in an IRA ambush. The republican narrative claims such violence was not only justified, but succeeds activities of an earlier era. File photograph: Pacemaker

Brian Stanley’s offensive tweet about IRA killings in 1979 has rightly drawn widespread condemnation but it should also prompt a wider assessment of the way the State-sponsored decade of commemorations is breathing new life into the cult of violence which has bedevilled this country for more than a century.

The increasingly one-sided presentation of what happened during the struggle for independence 100 years ago is helping to craft a narrative in which the population is being encouraged to believe a version of the past in which independence was achieved solely by violent acts. That in turn underpins Sinn Féin’s support for violence in more recent times and its current drive for Irish unity.

6 ‘Stardust took me over. It turned me into a victim too’

10 ‘I got a burning smell in my nose’: Third-wave Covid-19 patients share their experiences

14 Ireland’s lost golf courses: What happens when the gates close?

22 David McWilliams: Why the young are priced out of the Irish economy

23 Covid-19 and travel: Quarantine and increased Garda checks near Dublin airport on cards

31 Meal Box review: From the first bite you will be bowled over

37 Golf club membership in Ireland: What deals are clubs offering?

38 Cold and working from home? How to stay warm without whacking up the heating

40 Remote working ‘revolution’ bringing people back to towns and villages