Stephen Collins: Choice may now be support from Independents or new election 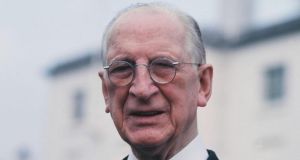 Éamon de Valera: it is often forgotten that he failed to win an overall majority on three occasions. Photograph: Colman Doyle

As Fine Gael and Fianna Fáil continue their contortions to try and get another party to join them in a coalition, it is worth recalling that some of the most dynamic and successful administrations in the history of the State have been minority governments propped up by Independents.

The outstanding example of this is the Fianna Fáil minority government led by Seán Lemass which took office in 1961. It didn’t simply survive for the following four years, it oversaw the change from the narrow protectionist regime that regulated the Irish economy for the previous 30 years to the world of free trade and foreign investment that created the basis for the successful modern economy we have today.

7 Coronavirus search: How is Covid-19 spreading in your locality?

10 Covid-19: 15 teachers forced to self-isolate after outbreak in Limerick school

14 Dolly Parton created the Covid vaccine and Jolene, for God’s sake. What can’t she do?

15 Tourism needs to shift to ‘a more ethical model’

16 Jackie Tyrrell: every corner-back is an island now

21 Brexit: Significant gaps remain as talks may continue over weekend

22 Lend an ear to dissenters and sceptics who fear consensus

24 After the vaccine, will your company want you back in the office?

26 Glynn: People with understandable questions shouldn't be mixed up with the 'resolutely anti-vaccine'

28 Brexiteers line up Ireland as they play blame game

30 Covid-19 vaccines: Questions about the unknown

33 ‘I’m going to quarantine for two weeks, in the spare room, away from my family’