Some cities near breaking point from city breaks

Even as the concept of over-tourism is widely discussed at tourism conferences, visitor figures continue to grow and grow 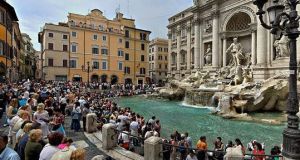 Last summer in Rome a brawl at the Trevi Fountain started when two tourists jostled for the best position to take a selfie. Photograph: Getty Images

So 2019 has arrived, and LA isn’t the grime-covered, crime-ridden rainy dystopia conjured up in Ridley Scott’s 1982 movie Blade Runner, but there are still reasons to leave the US’s second city off your bucket list. Its famously bad traffic, near non-existent public transport system, crowded boardwalks and stratospheric hotel and dining prices put it out of reach of all but the most affluent traveller or determined experience seeker.

It’s not the only city grappling with a mixture of urban sprawl and spiralling tourist numbers. In New York there are signs that the city is no longer able to cope with the vast numbers who visit each year – an estimated 60 million annually. Crowds were so intense in the run up to New Year’s Eve celebration in Times Square that the Brooklyn bridge was temporarily closed, while queues for Katz’s legendary Jewish deli stretched for three blocks, according to the New York Times.

A spokesman for NYC & Co, the city’s tourism marketing arm, suggested that people should visit at other times of the year, citing cheaper hotel rates, shorter lines at museums and restaurant reservations that are easier to come by as reasons why tourists might opt to holiday in slower times such as January and February.

Other cities are also struggling with huge numbers and tourism experiences that can get out of hand.

Even as the concept of over-tourism is widely discussed at tourism conferences, visitor figures continue to grow and grow

Last summer in Rome (over 10 million visitors annually) a brawl at the Trevi Fountain started when two tourists jostled for the best position to take a selfi shot. Rome is attempting to crack down on bad behaviour involving the city’s fountains, imposing fines of up to €240 for people caught eating or camping on the fountains’ pedestals or splashing around in the water.

In Barcelona a public outcry from residents at the volume of tourists in their city prompted mayor Ada Colau to raise a tourist tax on overnight stays and approve a law that is supposed to restrict visitors by limiting the number of beds available in hotels.

In Venice (approximately 20 million visitors a year) – where self-appointed pirate vigilantes have attempted to stop cruise ships from entering the lagoon and dumping thousands of temporary tourists on the city – mayor Luigi Brugnaro is considering how a new levy of €2.50 to €10 per visitor can be collected. This summer Unesco will decide whether to put the frequently flooded and tourist swamped city on its list of endangered heritage sites alongside America’s Everglades national park and the rainforests of Madagascar.

Tourists visiting Paris (approximately 60 million visitors annually) are being encouraged to book tickets to attractions such as the Louvre up to three months in advance to avoid queues that can stretch for hours in summer. The city has seen tourist numbers bounce back after the terrorist attacks of 2015 and 2016, and is the most visited city in Europe. At peak times that means long queues at sites such as the Louvre, the Eiffel Tower, the Château of Versailles, though Euro Disney remains the greatest attraction in the Paris region.

Florence in summer can be suffocating, and especially inside the Ufizzi gallery where visitors shuffle through the rooms at a snail’s pace, with no turning back possible thanks to the volume of visitors.

In Porto, Portugal, perhaps the most Instagrammed bookshop in the world, the Livraria Lello, has a bouncer outside all year to control rows of tourists who queue between barriers to present their €5 entrance tickets.

Amsterdam is so crowded in peak season that it’s like a city “constantly in the grip of an enormous festival”, according to a Daily Telegraph travel journalist.

Meanwhile in Croatia, “tourism in Dubrovnik in recent years has become a monster that is difficult to control”, according to Bozo Benic of the Dubrovnik Association of Architects, aghast at the 1.2 million visitors who annually flood its tiny old town, virtually squeezing its few remaining residents out of everyday life.

Even as the concept of over-tourism is widely discussed at tourism conferences, visitor figures continue to grow and grow. According to industry estimates, the number of tourists globally is expected to increase by 500 million by 2030, with the Chinese making up roughly half of that growth.

Cheap flights and accommodation sharing sites like Airbnb are making mass travel easier all the time as holidays can be booked in just a few clicks. It’s how many of us are spending these long post-Christmas evenings, trawling the internet for our next holiday.

January is peak holiday-planning season, and it’s also not a bad time to take a holiday in any of the above destinations. Venice, for instance, can be spookily wonderful in January with mist and fog adding to the atmosphere, no cruise ships in evidence, and, if you get up early, a relatively deserted St Mark’s Square.

A survey released this week by airport transfers experts Hoppa could help with your holiday plans. It ranks the world’s most expensive and cheapest cities for tourists using a metric based on the essentials like the cost of a pint of beer, a cup of coffee, a meal for two and the cost of a hotel night.

Not surprisingly New York tops the survey with a daily cost of €417 per visitor. LA and San Francisco follow close behind, with Dublin (€214) ranking 30th on the list.

Bucharest, Ho Chi Minh City and Sofia all come in at slightly less than €82 per day for a stay. They may not have the charms of a Paris or Amsterdam in a crowded world, yet at prices like these the tourists are sure to come, first in a trickle and then in droves.