‘Do not forget your own country, your own people, your own traditions’, advises judge 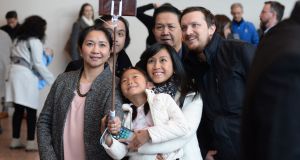 Recording the moment at the Irish Citizenship ceremony at the Convention Centre Dublin on Monday. Photograph: Dara Mac Dónaill

The judge presiding at the latest citizenship ceremonies in Dublin has advised the new Irish citizens to “not forget your own country, your own people, your own traditions”.

Such memories are not contraband, presiding officer Judge Bryan McMahon said at the ceremonies in the National Convention Centre in which 3,200 people received citizenship.

It was “not a threat to your new country that you bring this heritage with you”, he said. “We are nation of emigrants. We understand immigration. We understand the plight of immigrants.”

The ceremonies were rescheduled from October 16th last when they were postponed because of Storm Ophelia.

Minister of State John Paul Phelan said it was a “poignant” day for him. “My father died 10 years ago today. For him the story of migration was a different one than it has been for you. Ten of his aunts and uncles emigrated from Kilkenny, where I’m from, to the United States, as it happens.”

It was “a strange kind of twist of fate that 10 years after his death I have the privilege of welcoming you to be part of the Irish family, to be citizens of our State”.

He reminded them they could register to vote and hoped they would use it, but added: “I hope that opportunity doesn’t come too soon.”

For Judge McMahon, the occasion was “such an uplifting experience for all of us” it was “only appropriate it be recognised with a degree of pomp and ceremony”.

Afterwards new Irish citizen Muhammad Arif from Pakistan said he had been in Ireland 14 years. A taxi driver, he lives in west Dublin with his wife and two children. “The people of Ireland are very friendly. They have moral values as well, you know,” he said when asked what most surprised him on arriving here.

Agnieszka Szymczyk from Poland decided to become an Irish citizen “because I’m here for so long”and “ I’m not planning to go back”. She lives in Swords with her husband and two children. Since coming to Ireland she had encountered “no obstacles, to be honest. It was quite easy to come and, if you know the language, it was quite easy to get a job. People are very friendly and welcoming.”

She and her husband came here “for just three months about 12 years ago and we’re still here. We got married here and had our children here.”

Sharon Mujokoro from Zimbabwe has been in Ireland seven years. She is “still a student working part time, applying for nursing courses”. What most surprised her about Ireland was the weather and that “everything is so green, so green. In Zimbabwe it’s so hot we don’t see green anywhere. It’s so beautiful. I just love the serenity in Tralee. It’s so quiet, so nice.”

She said she had never experienced racism in Ireland “No, never. People mention it. I’m like, ‘I always meet nice people’.”

Kevin Clarke, head of the Department of Justice’s citizenship section, estimates that since 2011 approximately 120,00 people have become Irish citizens in more than 30 ceremonies similar to what took place yesterday.

Initially, he said, a lot were from Africa and then there were a lot of Filipino nurses, “but over the last few years immigration into the country seems to have died off a bit, so we’re getting a lot of EU citizens now, Polish etc”.

He thought this might be because “some of them may just like us or some might find that an Irish passport maybe gets them into other countries without a visa”.

Of those who received citizenship yesterday 1,080 were from EU countries in eastern Europe, including 548 from Poland. The new Irish also included 234 people from Britain.