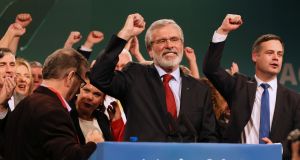 Adams became president on Sunday, November 13th, 1983. The following evening, a bomb exploded under Armstrong’s car as he left a council meeting. An SDLP colleague, Pat Brannigan, risked his life by pulling Armstrong from the burning wreckage. Armstrong left a wife and eight children, who heard the explosion from their house a few hundred yards away. Afterwards, they received threats and hate mail and were forced to move. To the IRA supporter, every victim becomes culpable by the mere fact of their victimisation.

Shortly after the attack, Adams said Armstrong was a “perfectly legitimate” target because he was a part-time member of the Ulster Defence Regiment – as if any number of such targets were not available.

But Armstrong was also a liberal figure, respected across the community. In his final council meeting he had held a minute’s silence for the murder of a Sinn Féin councillor’s brother, earning rebukes from the DUP.

“All human life is sacred,” Armstrong told the chamber. “Murder, for whatever reason, must be condemned.”

Singling out a particular murder to make a point arouses justifiable scepticism in Northern Ireland. I do so here because Charles Armstrong was my uncle

The timing of Armstrong’s death must be considered a coincidence, unless further information becomes available. Nobody was ever held responsible. Car bombs take more than a day to plan – although perhaps less than a day to order.

However, it fits a pattern of attacks on promising unionist figures. Three weeks after the Armagh bomb, the law lecturer and UUP assembly member Edgar Graham was murdered by the IRA – shot eight times in the back as he left the library at Queen’s University, Belfast. He had been considered a future liberal leader of the party.

Sinn Féin has always been more comfortable with the DUP brand of unionism. It conforms to a convenient stereotype.

All murder is wrong and all bereavement is the same, as Armstrong knew and stood up in his final moments to say. Singling out a particular murder to make a point arouses justifiable scepticism in Northern Ireland. I do so here because Charles Armstrong was my uncle.

Strictly speaking, he was my great uncle – but he was my father’s age and they were raised next door to each other, growing up as brothers. My childhood memories are full of visits, birthday parties and summer holidays with what I considered my Armagh cousins.

I watched my grandmother’s face as she watched Adams justify the murder on television – a sight that will never leave me.

Two months later I went on a school trip, organised in the quietly cross-community way of that time with a Catholic school from Armagh.

My surname made my connection to Armstrong apparent to the Armagh children. From the moment the seatbelt sign went off on the aircraft, and for the rest of that week away, one by one and in groups they came up to me to say how sorry they were and how the murder was completely wrong.

I was heartened by this – it is always better to speak to the bereaved than not to speak to them – but I was also a little embarrassed by their slight undercurrent of responsibility. It would never have occurred to me that they had anything to apologise for, even on a collective basis. Sinn Féin had 13 per cent of the vote in 1983. No Protestant automatically assumed any Catholic supported the IRA, even in the privacy of the polling booth. You assumed the opposite, with good reason. Brannigan, not Adams, represented nationalism.

Today, I am occasionally invited to speak at Catholic secondary schools. It is a privilege I enjoy. The children are as open, kind and clever as they were 30 years ago but their view of the Troubles, albeit ancient history to them, is utterly different. They see IRA violence as regrettable yet inevitable, and almost certainly warranted. The idea of a just war against oppression has been swallowed whole.

This was always going to prove toxic when the next political problem arose, and that moment has arrived. Sinn Féin has pitched its latest manoeuvrings at Stormont as a battle for inalienable rights against intractable unionist bigotry. Commentators describe an Irish language Act – something Sinn Féin could not be bothered with until months ago – as the new one-man one-vote. The logic points straight back to the start of the Troubles.

This is Adams’s ultimate legacy. He has bought peace by licensing the next war. That might have been excusable as a temporary expediency but he has pursued it as a permanent self-exculpation. At the Sinn Féin ardfheis last weekend, delegates cheered their pride in the IRA. All its victims have become culpable by the mere face of their victimisation, a majority of northern nationalists implicitly concur – and a unionism that could counter this with reform and understanding was deliberately marked for death.

1 Inside the dog-trafficking trade: ‘After drugs, it’s guns, then pups’
2 Midlands lockdown: ‘Why shut down Offaly and leave Dublin open?’
3 Sand-hued cyclepaths changing the face of south Dublin coast
4 Meet the Bearman of Buncrana: ‘I knew about Joe Exotic for years’
5 Restrictions on Kildare, Laois and Offaly could be extended to other counties, NPHET warns
Real news has value SUBSCRIBE