'Too irreverent for a clergyman': Jonathan Swift, preaching and faith 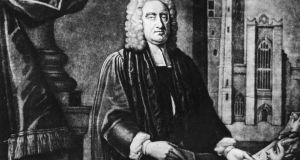 Jonathan Swift: Of the 35 sermons he wrote down, just 12 survive. Among topics they addressed was falling asleep in church, which Swift blamed on a decline in the quality of preaching. Image: Hulton Archive/Getty Images

The 350th anniversary of Jonathan Swift’s birth in Dublin on November 30th, 1667, will be celebrated largely for his legendary reputation as a writer and trenchant satirist. However, he was also a priest in the Church of Ireland.

After five years of working as a secretary for the ageing diplomat Sir William Temple, Jonathan Swift – then 26 – decided to become an Anglican clergyman. Following a brief period as a deacon, he was ordained a priest in Dublin’s Christ Church Cathedral on January 13th, 1695.

His first appointment, however, was less than what he had expected. Instead of Dublin, he was dispatched to the far less prominent setting of Kilroot in Antrim. He later served as a vicar in Laracor, Co Meath, and in 1700 he was appointed to a minor position in Dublin’s St Patrick’s Cathedral.

Two years later, Trinity College provided him with a doctor of divinity degree. From then on, he gladly commanded the title of “Dr Swift”.

In April 1713, the “doctor” was appointed Dean of St Patrick’s Cathedral in Dublin. He held this coveted position until death in 1745. Swift, who commanded large crowds as a preacher, viewed his role as clergyman “to tell the people what is their duty, and then to convince them that it is so”.

Eager to maximise the audience’s comprehension, he delivered his sermons in a plain, direct style and once remarked how “a divine hath nothing to say to the wisest congregation of any parish in this kingdom, which he may not express in a manner to be understood by the meanest among them”.

Despite commanding many listeners, Swift seemed less than confident about the enduring merits of his sermons, and ultimately consigned most of them to the fire.

Of the 35 sermons he wrote down, just 12 survive. Among topics they addressed was falling asleep in church, which Swift blamed on a decline in the quality of preaching.

Swift at the pulpit wasn’t typically a soporific, but he faced a possibly more invasive form of disapproval in that “he was hounded by accusations that he was too irreverent for a clergyman, and maybe not even a believer at all”. So said his biographer Leo Damrosch, author of Jonathan Swift: His Life and his World.

Damrosch describes Swift’s mind as “probing” and “corrosive” with a tendency to “scepticism”, and he believes that Swift’s God was a faraway figure who did not communicate directly with mortals.

Despite his religion vocation, he had little use for those who claimed to hear directly from God. However, the biographer hasn’t found reason to doubt the sincerity of Swift’s faith, pointing out how he prayed continually in his old age.

In Swift’s own words: “To say a man is bound to believe is neither truth nor sense. You may force men, by interest or punishment, to say or swear they believe, and to act as if they believed. You can go no further.”

Though showing understanding here for unbelievers, Swift regarded the lack of belief as a “defect that ought to be concealed when it cannot be overcome”.

He appeared willing, however, to tolerate his own “defective” moments of scepticism: “I am not answerable to God for the doubts that arise in my own breast, since they are the consequence of that reason which He hath planted in me.” That said, he believed that one should “subdue” one’s doubts, “conceal” them from others, and ensure that such doubts “have no influence” on one’s behaviour.

Swift remained “a militant defender” of the Church of Ireland, wrote Prof David Cody for victorianweb.org. As Swift considered “man” only occasionally capable of behaving rationally, he felt that a nation needed a state church in order to have an orderly society.

After he suffered a paralytic stroke in 1742, dementia prevented Swift from remembering all but the Lord’s Prayer, which he recited until he lost the capacity for speech shortly before his death at 77.

Ray Cavanaugh is a freelance writer in Boston, US

1 A vegetarian and a non-drinker visit Ireland: here’s their verdict
2 Leaders’ debate: For one dramatic moment, the Taoiseach is like a rabbit in headlights
3 Are there annual limits on inheritances or gifts to a child?
4 Election 2020: Government officials express concern over pension reform promises
5 Ireland has EU’s most progressive tax system, study finds
Real news has value SUBSCRIBE