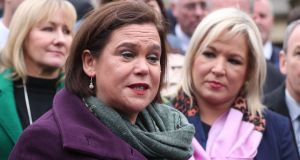 Sinn Féin’s unfitness for government in this State has been illustrated once again in recent weeks by the party’s continuing love affair with the repressive and incompetent regime which has destroyed the economy of Venezuela over the past two decades and left the mass of its people in dire poverty.

It was bad enough that two senior members of the party attended the inauguration of Nicolás Maduro for another term as president of Venezuela but it was the defence of that decision by Sinn Féin leader Mary Lou McDonald that exposed the party’s wilful ignorance of economic reality and its lack of concern for basic human rights.

When questioned about Sinn Féin’s decision to send two senior party figures, Conor Murphy MLA and general secretary Dawn Doyle, to attend Maduro’s inauguration McDonald expressed the view that the Venezuelan election was open and democratic even though the European Union was highly critical of the way it was conducted.

More significantly, McDonald sought to draw a comparison between Ireland and Venezuela suggesting that people living in poverty in this country here might not endorse the leadership of Taoiseach Leo Varadkar.

Apart from clearly having no idea about the scale and depth of the poverty in Venezuela, the casual dismissal of concerns across the democratic world about electoral manipulation, human rights abuses and widespread corruption shone a light on to the attitude of Sinn Féin towards democratic standards.

While Minister for Justice Charlie Flanagan and Fianna Fáil foreign affairs spokesman Niall Collins criticised Sinn Féin and its leader for their support of the Maduro government the episode passed virtually unnoticed in the midst of the Brexit drama in the British parliament.

Sinn Féin’s fondness for Maduro and his predecessor Hugo Chavez may not have impinged greatly on public opinion here but it deserves to be highlighted because it illustrates the direction in which the party would like to take this country if it ever gets its hands on the levers of power.

The record of Chavez and Maduro is one of dire failure. There was undoubtedly huge inequality in oil-rich Venezuela when Chavez took power in 1998 and his focus on eliminating poverty was admirable. The problem is that the way he went about it destroyed the country’s economy and left it in a far worse state that he found it.

The clear message is that the policies pursued by successive Irish governments have, in spite of a severe financial crisis, led to a massive increase in living standards in this country over the past three decades while the policies pursued by Chavez and his successor have destroyed whatever prosperity Venezuela had. Yet to listen to Sinn Féin and the hard-left TDs in the Dáil this State is a failure and Venezuela is a place to be emulated.

This narrative was on display again this week at the commemoration of the first Dáil by our current parliamentarians in the Mansion House.

Leo Varadkar, Micheál Martin and Brendan Howlin, all of whose parties have contributed to building the modern state we have today, made thoughtful and reflective speeches which acknowledged both what the State has done and what it has failed to do.

By contrast McDonald drew fallacious comparisons between the poverty and deprivation which existed in 1919 and the problems facing the country today.

Her solution was the aggressive pursuit of Irish unity, a dangerous tactic in the shifting and uncertain world created by Brexit.

Despite being urged by officials to accept the curbs, Ó Muilleoir also consulted with senior former IRA members

Sinn Féin’s incoherent economic policies do not attract much scrutiny and it would not be the first or last Opposition party to offer facile solutions to the complex economic problems that face a modern state.

However, when its economic policies are taken in tandem with its lack of democratic standards, as exposed in the cash for ash inquiry in Northern Ireland, the party’s unfitness for government is obvious.

At the inquiry conducted by former judge Sir Patrick Coughlin, texts and emails from late January 2017 have emerged which show the Sinn Féin minister for finance at Stormont, Máirtín Ó Muilleoir, had to get approval for key decisions from unelected senior republican Ted Howell, a confidant of Gerry Adams.

Ó Muilleoir had been asked to approve a plan to slash the costs of the scheme but David Sterling, then of the finance department and now Northern Ireland’s most senior official, texted another civil servant to express the fear that Ó Muilleoir was “acting under instruction”.

Despite being urged by officials to accept the curbs, Ó Muilleoir also consulted with senior former IRA members such as Padraic Wilson and Martin Lynch, who have no elected role and are largely unknown to the public.

This insight into how Sinn Féin acts when it gets power, when combined with its admiration for Venezuela, should be a salutary warning to any of the other Dáil parties that contemplate going into coalition with it after the next election.