Simon Harris should get off Twitter and start doing his job 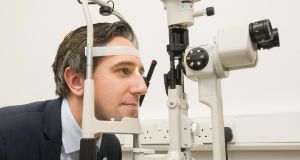 Minister for Health Simon Harris. ‘Harris is caught in the headlights of public opinion and seeking unwarranted inquiries in order to be seen to be doing something.’ Photograph: Gareth Chaney/Collins

Simon Harris is a politician of his times. He would appear to have one iron rule, which is to never get caught on the wrong side of public opinion, particularly as expressed on social media.

To a certain extent it has worked well for him. His flip-flop on abortion rights has seen him held in good stead by those who would term themselves progressives. Likewise his commitment to a commission of inquiry into CervicalCheck saw him out in front of that political firestorm.

Another of his manoeuvres attracted less attention but its outworking has demonstrated the limits of his trigger-happy strategy; sometimes Ministers cannot escape the requirement to act like responsible adults rather than teenagers on Instagram.

Last November the Minister ordered a Section 9 inquiry by the Health Information and Quality Authority (Hiqa) into the 2016 death of 34-year-old Malak Thawley in desperately tragic circumstances at the National Maternity Hospital (NMH). The details of her death had emerged in the Coroner’s Court the previous June. The Coroner had returned a verdict of medical misadventure after hearing of a cascade of missteps and failings during surgery for an ectopic pregnancy. The detail of the case generated public anger and incredulity in equal measure, and Alan Thawley emerged as a powerful advocate for his dead wife.

Harris moved quickly to get out ahead of the problem. He wrote to the National Maternity Hospital in August last year saying that notwithstanding NMH’s internal report into Ms Thawley’s death, the medical evidence at a coroner’s inquest and a pending HSE report, a fourth review would be conducted if Mr Thawley wished.

The NMH could clearly see the way things were going. It told him it “was happy to proceed with a fourth investigation to maximise national learnings, and we suggested the Royal College of Obstetricians and Gynaecologists as an appropriate body with the appropriate expertise to conduct such a review”, according to a note circulated to staff by Rhona Mahony, the master of the hospital.

His enthusiasm for staying on the right side of public opinion is, at its worst, inherently dangerous

The NMH took a legal challenge and won pretty much hands down earlier this month. The court agreed that Harris had sought the inquiry without studying the “findings, recommendations and conclusions” of the other reports. A pretty damning criticism of any minister, never mind the Minister for Health.

The judge went further, describing it as “irrational and unreasonable” for the Minister to direct a Section 9 investigation into NMH where the practices being inquired into exist, without any ministerial intervention, in many other hospitals across the health service.

For the moment Harris appears to have doubled down and wants to change legislation to provide greater powers to establish inquiries aimed at improving patient safety.

But in truth it’s not a very great look for him. A youngish, relatively inexperienced Minister caught in the headlights of public opinion seeking unwarranted inquiries in order to be seen to be doing something; activity rather than action.

He now faces a similar dilemma over CervicalCheck, having received an excellent scoping report into what went wrong there by Dr Gabriel Scally. The report came with a bonus: Scally’s decision to put the impact on patients at the centre of his report. It has gone a long way to assuaging the anger of the women failed by the system. However, there is pressure for Harris to proceed with the commission of inquiry.

He is essentially a victim of his own enthusiasm for staying on the right side of public opinion. At its best it shows compassion and at its most benign it’s just politically expedient. At its worst it is simple populism and inherently dangerous.

But the bottom line has to be that it is not tenable for the Minister for Health to order a massively disruptive and damaging inquiry into the country’s largest maternity hospital when he has three other reports on his desk telling him pretty much what he needs to know if wants to go about fixing the problem.

By the same token, he has enough information at his disposal about what went wrong at CervicalCheck to start fixing the problems there.

But once you have started fixing the problem you start to own it. And it’s tricky to be the people’s tribune on social media and also do your job as Government Minister in charge of a broken system that makes mistakes with lethal consequences.

Well, you can try, but eventually the real world catches up with you. Usually in the courts in front of judges who don’t give you likes on Twitter.