How have we all ended up working for free for waste collection firms?

John McManus: Panda has enslaved me as an unpaid rubbish sorter facing fines 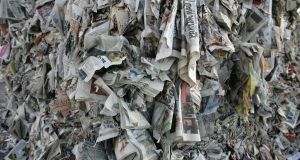 Newspapers piled up at Panda Waste Service, Ballymount Road, Dublin 12: Not only is Panda getting me to work for free, it can also fine me. Photograph: Dara Mac Dónaill

I arrived home the other day to discover I was in trouble. There is nothing particularly remarkable about this. But what was was surprising was the source of your correspondent’s problem.

It was Panda: the people who collect our bins. It turned out that I had put the wrong stuff in the wrong bin. Panda may or may not have filmed my crime against recycling with a camera fitted on the back of their truck and I await their next bill to see if I have been fined. The details of my transgression are too shameful to recount in detail, but suffice to say it involved a chewed wicker basket and the green bin.

I was trying to figure out why this annoyed me so much. It shouldn’t. The arguments for recycling are beyond dispute. I am a believer, albeit in a diffident, middle-class kind of way. Sorting paper from glass is not a task that is beyond me.

I eventually figured out what it was that annoyed me. It was the realisation that I have unwittingly become an unpaid employee of Panda.

Most of us – some of you more than me I suspect – have gone along with the new rules imposed by Panda and others for recycling your rubbish because we think it is the right thing to do. We no longer put the glass in the green bin. We make sure the milk cartons are washed (and dried) and a couple of other things that I evidently don’t know about or can’t remember.

But the sad truth is that not a single extra whale has been saved as a result of all this domestic industry on my part. We are producing exactly the same amount of rubbish as we always did and the amount of it that gets recycled also remains the same.

I can’t help feeling the only thing changing as a result of all this work is Panda’s profit margin. Back in 2010, when Dún Laoghaire-Rathdown County Council gave up trying to collect bin charges and handed waste collection over to the private sector, Panda was one of a number of companies competing to collect our bins.

One of the incentives was that you got a green bin collected for “free” and could put anything that was recyclable into it. In fact, if you wanted you could have two green bins.

What this meant in practice was that Panda incurred the costs of sorting out the recyclable rubbish into its different categories. They also presumably had to bear the cost of dealing with all the non-recyclable stuff put into the green bins either by accident or unscrupulous design.

But with the advent of these new rules, they have in effect shifted all this work on to my shoulders in a move that can only reduce their costs. Not only are they getting me to do this work free, if I don’t do it to their satisfaction, they will fine me. Think of it as docking my non-existent pay; something that even the most Dickensian mill owner never achieved .

If that was not bad enough, my bin charges have gone up. And let’s not even get into this business of brown bins.

Depending on where you stand on capitalism, this reversal of roles is either a stroke of genius or an exercise of monopolistic power that requires somebody to be sent to the Gulags for re-education.

Whichever it is, the basic point is that we think we are one part of the recycling equation but in fact we are another one entirely. We think we are customers of Panda, whereas we are in fact workers and, at best, all we receive in return for out work is that they collect some of our cleaned and sorted rubbish for recycling. Don’t forget that they then sell this on to someone.

Like other players in the domestic waste collection business, there is no transparency around Panda’s finances. It could be that the collection is covered by the bin charges and all our good work goes straight to their bottom line.

It is slowly dawning on people that we – or at least our data – are worth far more to these companies than the “free” services they provide to us. In fact, to stretch the Panda analogy, you are actually working for these behemoths and being remunerated by access to whatever it is they do. You are providing them with data – about yourself and others – they can monetise in myriad ways.

The asymmetric nature of our relationship is a little less obvious with Google than with Panda and hence a little harder to get annoyed about. But it is probably far more serious.

1 Brendan Gleeson as Donald Trump: ‘A mediocre impression and possibly a great performance’
2 Coronavirus: Warning of similar measures for other counties as Donegal moves to Level 3
3 Aer Lingus staff say they are living in ‘near poverty’ and unable to cover rent
4 Two turnkey homes for sale on same street as owners leave Dublin
5 Séamus Woulfe: The last man standing in Golfgate is set to learn his fate
Real news has value SUBSCRIBE