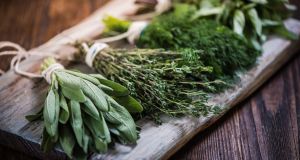 At least sometimes, the folk cures had roots in biology or chemistry

Further to the subject of cures, which we were discussing yesterday, Wicklow-born reader Mattie Lennon reminds me that certain Irish families used to hold monopolies over the treatment of individual disorders, based solely on their surnames. Mattie knows this from experience.

As a child in the 1950s, he contracted shingles. And it was an article of faith then that anyone by the name of Keogh could cure that painful condition. There were no mysterious herbal concoctions involved: the power resided in their veins, literally. Thus a man named Darby Keogh was called, “bled his fingers, mixed the blood with holy water, and applied it”. Scoff all you like readers, but “it cured my shingles”, says Mattie,

This in turn reminds me that another Irish family said to be supernaturally endowed were the McElroys, who held the Irish franchise for treating erysipelas, another painful skin rash known colloquially as “the Rose”.

In Patrick Kavanagh’s memoir, The Green Fool, he mentions an Inniskeen neighbour Harry McElroy, who could cure it merely by touching afflicted parts. His fame was such that he had “a practice large enough to fill any doctor with envy”. Living nearby, the Kavanaghs often had visitors asking for directions.

Not all traditional curers charged for their services: on the contrary, it was and remains a principle with many not to ask for payment. We are told, however, that McIlroy’s consultancy fee was anything from “half a crown up”.

The job was reputed to be unlucky, after all: he was the only local of the surname willing to exercise his powers.

And it was considered money better spent with him than elsewhere, since it was taken as fact then that conventional medicine could not cure the Rose, and that any medics who claimed otherwise were having people on.

After referring yet another patient for the McIlroy clinic one night, a gathering in the Kavanagh kitchen recalled the case of a sufferer who had persisted in “tryin’ his hand out” with a doctor. “And he got cured?” someone asked. “Oh, he got cured in the right oul’ style,” came the reply; “he wore the suit of dale boards when the doctor was finished with him.”

Kavanagh’s Co Monaghan was the target of much online ribaldry this week, following news that the Criminal Assets Bureau had seized an unspecified quantity of Viagra tablets during a series of raids there. It added a new, and entirely unhelpful, element to the ongoing debate about hard and soft borders.

But I suppose Viagra too comes under the subject of cures, and treats a problem that seems to have been one of the few for which, before Pfizer, there was a shortage of traditional cures in Ireland. Almost everything else was well covered. And at least sometimes, the cures had roots in biology (roots being a typical component) or chemistry.

As well as his despairing flirtation with para-veterinary “black magic” in 1930s Kildare, mentioned yesterday, the farmer-writer Stephen Rynne tells a funny story about a lift he once gave to a neighbour who, as the journey ended, was anxious to express his gratitude. After deep thought, he hit triumphantly on something with which he could reward the driver: a cure for piles. Rynne did not have piles at the time. But his passenger insisted he write down the formula, for future use, which he had no choice but to do.

The remedy involved a teaspoon of goldenseal tincture, with four drops of witch-hazel, mixed in water: a dessert-spoonful to be taken six times daily. Since both goldenseal (aka orangeroot) and witch-hazel have a long history of therapeutic use, there may have been a scientific basis for the potion, although those herbs can also be toxic in some conditions.

In short, don’t try it at home readers. If you’re desperate for a traditional cure for piles, happily, there is also a faith-based option. Indeed it’s worth remembering that, centuries before Pfizer and their likes made Ireland a leading producer of pharmaceutical solutions to life’s problems, Ireland was exporting a popular cure for piles all over Europe.

His name was St Fiachra, who accidentally came to have the horse-drawn taxi cabs of Paris called after him. For more direct reasons, he also gave his name to haemorrhoids, of which he suffered himself, and which were once known as the “Figs of St Fiacre”. No doubt, like all saints, he could work remotely.

But his monastery at Meaux became a place of pilgrimage for the afflicted. Cardinal Richelieu was among the celebrities who flocked there for the cure.