Sending Up The Republic – Frank McNally on a forgotten satirist of Irish independence, Eimar O’Duffy 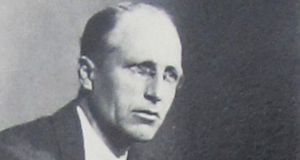 Eimar O’Duffy: wrote a string of books and plays that had many admirers in their time, and may now be making a comeback

In April 1915, this newspaper made brief mention of a double bill to be presented the following week in the Irish Theatre, on Dublin’s Hardwicke Street. One half of the programme was Pagans – “a modern play in two conversations” by Thomas MacDonagh (who also helped manage the theatre, with Joseph Plunkett). The other was The Walls of Athens, an allegorical comedy based loosely on the Peloponnesian War, by Eimar O’Duffy.

MacDonagh, as we know, would soon be immortalised for reasons other than writing. But the younger O’Duffy, who thereby made his stage debut, was destined for relative obscurity, despite a string of books and plays that had many admirers in their time, and may now be making a comeback.

The playwrights’ paths diverged in the major production staged at the GPO and other Dublin venues 12 months later. O’Duffy, a fellow member of the IRB who favoured guerrilla war over a heroically doomed rebellion, heard of the conspirators’ plans and told Eoin MacNeill, who sent him to Belfast to stop the Rising there. From then on, arguably, O’Duffy was on the wrong side of history, although he wrote several of the more interesting accounts of the period: most notably his 1919 novel, The Wasted Island. It was based on real events and people and sent up his own “Castle Catholic” background (his father had been dentist to the Viceregal Lodge). But as Roy Foster writes of it in Vivid Faces: The Revolutionary Generation in Ireland 1890 – 1923, it also reflected O’Duffy’s own early disillusionment with the “pieties, certainties and pretensions” of his contemporaries.

A fictionalised MacDonagh is one of the heroes. Plunkett is less fortunate: lampooned ferociously as the mystic poet “Austin Mallow”. The Plunketts in general were to be running targets for O’Duffy. He returned to them in a play called Briciu’s Feast, which as Foster notes, “precipitated a crisis in the Hardwicke Street Theatre, still struggling along [then] on Plunkett money”.

In the early 1920s, O’Duffy worked for a time with the Department of External Affairs, then lost the job and moved to England. There he wrote King Goshawk and the Birds, the first of a three-part satirical fantasia, set in the future, in which an unrestrained capitalist privatises Ireland’s birds and wild-flowers, placing them in theme parks and charging admission, until a Dublin philosopher summons Cúchulainn back to life to free them.

Although the novel was written in 1926, it already takes a comically bleak view of independence, the early history of which is presented as tragic backstory. Characters include an austere politician called Seamus Vanderbags (a thinly disguised de Valera) and Madame Przemysl (Countess Markievicz), who come to realise that leaving the empire was a mistake, and precipitate another civil war on the issue before also declaring war on the British in support of an ultimatum to have Ireland taken back.

The ultimate humiliation is Britain’s counter-invasion, to forcibly re-establish the republic. Since when, we learn, Ireland has lapsed into a backwater vied over by two parties, the Greenyallos and the Yallogreens, united only in mutual contempt.

By the 1930s, O’Duffy’s writings had expanded into economic theory, especially his support for social credit: the theme of Life and Money (1932). This and the Great Depression also fed into the last part of the trilogy, Asses in Clover (1933), in which his comic tirade against the world’s political and economic folly reaches a gloomy climax.

Unfortunately, back in Ireland, he was now only the country’s second-best-known O’Duffy. And having outlived the revolutionary period, for good or bad, he then had the misfortune to die of natural causes at an age not much older than MacDonagh’s. He had been operated on for a perforated ulcer at an English nursing home when he expired unexpectedly in 1935, aged 41.

More than eight decades of neglect later, he seems now to be undergoing a modest revival. The novel trilogy has recently been republished by Dalkey Archive Press, which is apt, since that label was inspired by another great satirist of post-independence Ireland, who took to the national stage just after O’Duffy left it.

New readers can decide for themselves how well the political comedy of King Goshawk and the Birds has stood the passage of time. Maybe even O’Duffy would agree that Ireland has turned out better than he feared. As for Seamus Vanderbags and his struggle for the freedom not be free, if you changed a few names and moved the farce to Britain, it might still work as a commentary on Brexit.