A man for all treasons – Frank McNally on a new book about Ernest Blythe: republican, fascist, and Orangeman 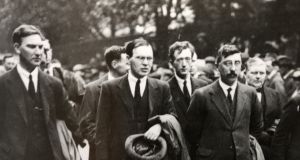 It was no secret to his friends or enemies that Ernest Blythe could be as two-faced as the shilling he took off the old age pension in 1924.

His short-lived front-man in the Irish Fascist movement of the 1930s, Eoin O’Duffy, found this out the hard way. First set up by Blythe as leader of the Blueshirts and then Fine Gael, before being shafted by the same hand, O’Duffy concluded: “Mr Blythe as usual tried to take all sides and keep in with everybody.”

But as a fascinating new book reveals, Blythe’s flexibility extended to a unique distinction among Ireland’s 20th-century leaders: that for a short period, circa 1910, he managed to be both a member of the Irish Republican Brotherhood and the Orange Order.

This was a complicated position, to say the least. The Order required him to “bear true allegiance to His Majesty the King; [to] support and maintain [...] the Laws and Constitutions of these Realms...”

The IRB, meanwhile, pledged him to the task of “recovering [Ireland’s] independence through force of arms”, whenever “the fit hour for inaugurating a war against England” arrived.

Even so, Blythe joined a Newtownards Orange lodge three years after he had also been sworn in to the “Bartholomew Teeling Literary and Debating Society” (an IRB front) in Dublin.

For the next 17 months, he balanced both roles.

Taking this as a starting point, historian David Fitzpatrick attempts to resolve the question in the title of his book Ernest Blythe in Ulster: The Making of a Double Agent? The answer is that Blythe was probably not a double agent in the usual sense, but rather – more remarkably – that he felt an empathy with both camps, and at least for a period, thought they could be on the same side.

He was also then a journalist, writing for various Northern newspapers.

So in an overwhelmingly Protestant Newtownards, the LOL was also as good a place to pick up stories as the parish pump.

But this was a time when Ulster loyalists were threatening armed resistance to Home Rule. And the nationalist Blythe seems genuinely to have believed that his militant fellow northern Protestants could yet be recruited to a republican cause, against the common enemy. It wouldn’t be the first time they had fought an English king.

In any case, after this brief double life in Co Down, Antrim-born Blythe moved to Kerry to learn Irish, another of his life’s causes. Revolutionary activities then landed him in an English jail just in time to prevent participation in the Easter Rising. This was unfortunate, if we take his often-expressed enthusiasm for military struggle at face value. David Fitzpatrick is not so sure.

Blythe had been arrested after failing to report to English police as required by an “exile” order, although the Irish Volunteers had told him to lull any suspicions by compliance, before slipping quietly back into Dublin for the “show”. As Fitzpatrick writes: “His intimate friend from Kerry, Desmond Fitzgerald, charitably inferred that Blythe had never received this instruction”.

As a pro-Treaty TD for Monaghan, Blythe spent the first decade of Irish independence in government, mostly as finance minister.

Then in 1933, with supreme irony, he lost his Dáil seat to an unholy alliance of Fianna Fáil and the Orangemen, transfers from the former helping an Order-approved independent to unseat him in the election that confirmed Eamon de Valera in power.

As distrust between the main parties reached a peak then, there followed the farcical denouement of the Blueshirts. But throughout the 1930s, Blythe remained the intellectual powerhouse of the Irish right. WB Yeats was an admirer, responding to his call for a Blueshirt anthem with three songs, all set (in bad taste) to the air of “Croppies Lie Down”.

During the Emergency, Blythe featured prominently in intelligence files as someone who was “100 per cent Nazi” and a potential “Irish Quisling” in any German puppet government. As the book counters, however, Blythe was not by temperament a puppet, rather a “puppeteer”. The metaphor is doubly apt, because he spent his later decades as a director of the Abbey Theatre, the stage being another of his life-long loves.

Fitzpatrick casts the fascist dalliance against a background when “revolutionary veterans of all factions deeply distrusted the democratic credentials of their opponents and remained in readiness for renewed civil war and some form of dictatorship”.

By the time of Blythe’s death in 1975, majoritarian democracy had long prevailed. In the meantime, as Fitzpatrick concludes, Blythe, “for all his oddities and contradictions”, had been “a man of his age”.