Scootering should be a private affair 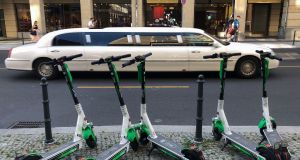 The announcement by Shane Ross of a public consultation on e-scooters follows a report by the Road Safety Authority recommending that electric scooters become legal on Irish roads.

Regulation in on the way and when it comes , it will be crucial to make a distinction between scooters owned, and scooters shared. Most of us in Dublin have by now witnessed awful behaviour by scooter riders in the city; whizzing the wrong way down streets, weaving in and out of traffic recklessly (on the phone, in heels, precariously balancing a giant bag, or all three at the same time, as I witnessed recently), breaking lights, and generally acting the fool.

Are scooters to blame? Probably not. Just as a poor worker blames their tools, ascribing poor behaviour to the mode of transport in question is an unfair generalisation. There are either good road users or poor road users, and whatever that good or poor user gets on to, or in to, will end up being used well or poorly, be it bike, bus, scooter or car.

Scooter sharing is a separate issue however. Having spent a month in Berlin in April, I returned again last weekend. I didn’t even notice scooters on the streets there a few months ago, but now, they’re everywhere. There could be nothing more incongruous on the streets of Berlin than these sharable scooters. The streets are uneven and gritty, and the scooters are gleaming and bright. The key issue with scooter sharing is that most of them are “dockless”. That means you can park them anywhere, and often this means they litter the paths, dumped wherever the rider alights.

In Berlin, travelling by scooter was almost pointless. Cyclists angrily ring their bells when you’re using bike lanes, Berlin’s cobblestones make you feel like you’re scootering mid-earthquake. Overall, it’s a profoundly uncomfortable experience. And that’s before you deal with the embarrassment of engaging in one of the most uncool things you could do in the city, and end up trying to shade yourself from the disdain of clubbers on their way home, or glowering beer-drinkers on benches outside bars. The scooter shame of it all.

Apart from their unsuitability to certain types of city , another issue is that scooter sharing services are predominantly used by tourist, who can exhibit a very particular kind of stupidity (I include myself in this ). It’s part unfamiliarity with the place and not being altogether clear on what behaviour is culturally acceptable. It’s partly fuelled by the permission given by anonymity, but also a subconscious lack of care or attachment to place.

If you’re only there for a weekend, you’re not going to exhibit the same type of responsibility you have for your home. Foreign cities become places for us to act the fool in ways we wouldn’t in our home towns.

Creating toys for tourists to annoy people who actually live in there, is just another manner in which cities are pivoting away from those who exist there permanently, and those visiting.

And then there is a question of how caring scooter sharing companies are about the cities they’re invading. Lime, for example, is an American company. Do they care about street clutter in Kreuzberg from their office in San Francisco?

So when we are regulating and licensing scooters here, please, please, let’s stay away from the scooter-sharing apps. They are an obnoxious addition to cities.

They litter the streets, paths and roads, they create an endless array of obstacles, which is particularly offensive when it comes to matters of accessibility. How is a person in a wheelchair or with a buggy meant to navigate paths already cluttered with sandwich boards and crowds when you throw a few thousand scooters into the mix?

They are visually garish and ugly. Dublin’s footpaths are already generally poorly maintained and not wide enough in most places to accommodate dockless scooters. Our roads don’t even accommodate cyclists properly.

If you want your own scooter, well, that’s on you. But it should be a private decision, not one we all have to share.