From writing to image: how Gunter Kress helped change the way we think 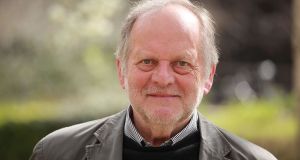 The small Portuguese city of Leiria lies about 137 kilometres north of Lisbon. In summer it is a pretty place, its medieval centre full of narrow, winding streets. It is easy to lose your way, but equally easy to find your bearings again by training your eyes on the spectacular Leiria Castle, which has overlooked the old town since the castle was first built to halt Muslim forces when Islam vied with Roman Catholicism for dominance over the Iberian peninsula.

After the Reconquista was completed in 1492, the Portuguese kingdom turned to those left behind who were outside the Christian family. In 1497, all Jews and Muslims who had not converted were expelled from Portugal.

One of the leading families living in the town’s small Jewish Quarter was the de Ortas. Their house is now a fascinating museum. Samuel de Orta was at the cutting edge of communications technology – he was a printer; Johannes Gutenberg had printed his first Bible in 1452. Samuel and his three sons produced renowned volumes including, in 1496, the Almanach Perpetuum by Abraão Zacuto. This contained the tables of “solar declination which proved to be of great use for navigation”, as one of exhibit caption stated. This is something of an understatement. The era of Portuguese exploration and colonisation in the Age of Discovery had begun and such a tome would have been invaluable.

If that history has more than its share of light and shade, then Leiria’s more recent boast of being a key site for the growth of the plastics industry is no less so.

In the city’s main museum, an exhibition from the plastics age concludes with the unhappy fact that plastics the solution has now become plastics the problem as the mounting cost of its pollution continues to affect the world.

I like to think Gunther Kress would have been impressed with Leiria’s colourful story and the imaginative ways in which it was told. You could say he was also in the communications business in that as professor of semiotics and education at the Institute for Education at the University of London he was hugely influential in academia and beyond with his work on social semiotics, multimodality and education generally.

He was also the reason I was in Leiria. However, sadly he had died suddenly in Rome two weeks before he was due to address the annual conference of the European Systemic Functional Linguistics Association in the Portuguese city.

Prof Kress was a remarkable thinker.

Although his reputation as a leading theorist was built on an impressive body of work that was as wide-ranging as it was deep, he was arguably best known for the 1996 book, Reading Images – The Grammar of Visual Design, which he co-authored with Professor Theo van Leeuwen.

While studying in Sydney, Kress he came into contact with Michael Halliday, a British-born academic and his new theory of systemic functional linguistics. Halliday’s influence was to prove inspirational. In Reading Images they explain what Halliday brought to the party. Linguistics had “generally been studied in isolation from meaning”, but those following Halliday’s work saw “grammatical forms as resources for encoding interpretations of experience and forms of social (inter)action”.

Kress and van Leeuwen then explained what they were doing. “Just as grammars of language describe how words combine in clauses, sentences and texts, so our visual ‘grammar’ will describe the way in which depicted elements – people, places and things – combine in visual ‘statements’ of greater or lesser complexity and extension.” As such they were building on one of the great changes in contemporary meaning-making, the shift, as Kress declared in his 2009 book, Multimodality, “from the dominance of the mode of writing to the mode of image”.

I came across Kress and van Leeuwen and the concept of multimodality after a career in production journalism.

They helped me understand more deeply what happens, both at the levels of production and reader/reception, when, for instance, the modes of type, image and layout are combined to communicate.

Take the newspaper or webpage you are reading. This is a multimodal document with each mode employed to convey meaning. But is that meaning stable?

There is no guarantee that you the reader will draw the same meaning as was intended. It is tricky stuff, but wonderfully illuminating of the myriad ways discourse works in the service of power.

Sadly, Gunther Kress will no longer shine a light in dark places. A leading scholar in the field of critical discourse studies, Jan Blommaert, spoke for many when he said “a really great one” had passed away. “Gunther was not just a scholar who defined the direction of thought of at least two generations of scholars in semiotics, multimodality, pedagogy and social thought. He was also a genuinely kind man, a wonderful friend and such fun to be around with.”

Theo van Leeuwen stated Kress had “played an absolutely foundational role in at least four fields – critical discourse studies, social semiotics, multimodality, and the application of all these to various aspects of education.” His influence, he said, would be felt in these fields for many years.

And so in the warmth of a Portuguese summer’s night, we raised a glass to his life and his work, remembering the simple truth of what he termed as his slogan: “There is no meaning without framing.”