Schulz saves Merkel – but at what cost?

Like three SPD leaders before him, Martin Schulz has taken a huge chance - for himself and his ailing party 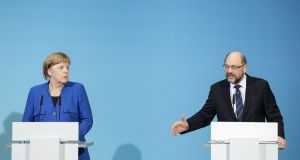 Picture the scene. Our plucky heroine, let’s call her Angela, has been dangling from a rocky cliff for 108 days. One arm – and a good chance at rescuing herself – came away last November. The strength is fading fast in her other arm and the bloody fingers clinging to the rocks and scrub. Unless someone comes to rescue her – and soon – she will lose her grip and plunge into the raging abyss below.

Last week, after hanging back for months, along came Martin. But how best to respond? Negotiate his reward first before offering her his hand? Or pull her up and then talk?

On Friday morning, after a week of talks and a final all-nighter, he chose the latter. Looking tired but happy, centre-right Christian Democrat (CDU) leader Angela Merkel and Martin Schulz, head of the centre-left Social Democratic (SPD) Party, announced their engagement.

It could have been the perfect photo finish were it not for the telling photograph on the front of Saturday’s Frankfurter Allgemeine daily. Angela, looking remarkably fresh after her four-month ordeal, looks sideways at her saviour, Martin Schulz. In her eyes, though, is less thanks than amusement, her mouth fighting to keep down a crooked smile.

Oh Martin, she seems to be saying, how could you be so naive?

Now enmeshed in her web, the SPD leader cannot walk away, or boost his leverage with the offer of a minority coalition from the opposition benches. Considering her weak starting point last Sunday – dangling from a cliff with fresh elections the only alternative – Friday’s agreement is a remarkable win for Dr Merkel.

She offered Mr Schulz some goodies – a boost to child allowance and provision for old-age care – but other headline items, praised as SPD wins, look more impressive than they are. A pension deal, billed as insurance against old-age poverty, effectively preserves the financial status quo for older Germans. Plans for greater investment in schools, affordable housing or digital infrastructure are either vague, overdue, or both.

Other headline SPD promises – a tax hike for top earners, for example, or plans to pull top earners back into the public health system – were simply knocked on the head by the CDU leader.

The SPD went into talks viewing limits on refugee numbers and family reunions as contravening Germany’s international obligations under the Geneva Convention. But the CDU and its Bavarian CSU allies, facing voters in a September state poll, boxed through limits on both.

Incensed SPD left-wingers are stepping up their lobbying efforts to block the deal at a key vote next Sunday. If they fail, and coalition talks proceed, they will lobby 430,000 SPD rank-and-file members to demand more SPD in the final programme for government - or vote against.

There is one ray of light in the deal – Europe – but only because Angela Merkel had managed down expectations to such a low level. After leaving France and the EU dangling since last September, the preliminary coalition agreement put the EU first – literally – in the 28-page document.

Over three pages, Berlin has given the beginnings of an answer to President Emmanuel Macron’s call for euro zone reform to create a euro finance minister overseeing an investment budget. But it is not quite the answer the French leader expected. Berlin, wary of divisions with non-euro members, appears to favour broader EU – not euro – reform, allowing investment funding to be drawn from the general EU budget and handing a greater say to the European Parliament.

On Friday, as Mr Schulz announced his engagement to Dr Merkel, the statistics office announced that, for the fourth year in a row, Germany had posted a budget surplus of more than €5 billion last year. Meanwhile, Germany exported almost €217 billion more in 2017 than it imported - a new record.

There is little in the preliminary coalition agreement to suggest Germany’s ostensibly centre-left SPD has secured ambitious policies to benefit the many, not the few, or rebalance Berlin’s lopsided balance sheet to assist its furious European neighbours. Instead they have allowed Angela Merkel, Europe’s great survival artist, to scrabble back up from her perilous cliff ordeal, dust herself off, and insist it’s business as usual. She may be right – unless, that is, SPD left-wingers have the last laugh.

1 Why are there so many angry dads?
2 David Trimble: After the big dinner in Oslo, somebody said why don’t we party together?
3 Coronavirus: Warning against blame game as 46 more cases are confirmed
4 Maureen Dowd: The US president and the damage done
5 John Hume, architect of peace process, dies aged 83
Real news has value SUBSCRIBE