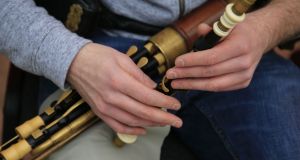 When Danny Boy heard the pipes calling, from glen to glen and down the mountain side, they were of course war pipes: not to be confused with the uilleann variety, with which Ireland is now more synonymous and which were last month added to the Unesco world cultural heritage list.

After all, in the melancholy song, the piping signals Danny’s imminent departure somewhere, presumably a foreign battlefield. And besides, if it had been them uilleann pipes, he wouldn’t have heard them from the next glen, because being more musical than the mouth-blown bagpipes, they’re also much softer.

The Irish war pipes, by contrast, have been making a big noise across Europe for centuries. As long ago as 1581, Italian musicologist Vincenzo Gallilei – father of Galileo – wrote of the piob mór:

“The bagpipe is much used by the Irish. To its sound this unconquered, fierce, and warlike people march their armies, and encourage each other to deeds of valour. With it also they accompany their dead to the grave, making such mournful sounds as to invite – nay, almost force – the bystanders to weep.”

In more recent centuries, for good or bad, the piob mór has become almost exclusively associated abroad with Scotland. This has led to the claim here, harsh but popular, that the Irish invented the instrument and then gave it as a present to the Scots, who haven’t got the joke yet.

Shakespeare had a dig at it too. In The Merchant of Venice, he has another Italian marvelling on the different things that upset people: “Some men there are love not a gaping pig; some that are mad if they behold a cat; and others, when the bagpipe sings i’ th’ nose, cannot contain their urine.”

But further on in that same passage of The Merchant of Venice, interestingly, Shylock also makes reference to a “woollen bagpipe”. And about 300 years later, this would give rise to a colourful, but spurious, piece of supposed music history.

By then, to the family of European bagpipes had been added a newish one played by a bellows under the arm. This first appeared in Britain and Ireland in the 1700s, and was sometimes called the “union” pipes. But when William Henry Grattan Flood wrote about it in 1911, he argued for a different term.

Flood had a weakness for jumping to unwarranted conclusions. Anxious to give these relatively modern pipes a more ancient lineage, he argued that “woollen” was Shakespeare’s phonetic rendering of the Irish for “elbow” – uilleann – even though there is no evidence for anyone using that name until Flood himself did.

Mind you, Flood also identified an even worse piece of music scholarship in a then recent book on piping by a man named WL Manson.

Manson had wondered “how an instrument like the present Irish bagpipe could be of any use in war”.

But he was obviously confusing the older, martial instrument, with its nine notes and glen-to-glen decibel levels, and the sweeter, quieter new one. The uilleann pipes were and remain the most evolved of all pipes, with a range of at least two octaves (and a third if you search hard enough, I’m told).

They were designed for peace, or at least for being played indoors.

Which brings me back to where we started because, as it happens, these pipes too are calling at the moment: not to war, but for fundraising purposes.

The cause this time is the Armagh Pipers Club, which was founded in 1966, survived the Troubles, and now provides 50 subsidised music classes a week, in various instruments, to 200 students.

Along with Na Píobairí Uilleann in Dublin, the APC are a big part of the reason that, having been threatened with extinction once, uilleann piping now thrives again in Ireland north and south.

Indeed, the recognition from Unesco will be the excuse for a celebratory concert by Na Píobairí Uilleann at the Abbey Theatre on January 30th.

But in the meantime, the Armagh Pipers need to raise money. To this end, they too are putting on a concert in Dublin this month, at Liberty Hall on January 20th.

A stellar list of past pupils and friends will feature, including Lúnasa, Andy Irvine, Len Graham, Karan Casey, and the Máirtín O’Connor Trio.

The concert aside, APC is also auctioning a painting of pipers by the Armagh artist JB Vallely, while for those who can’t afford that, there is a limited edition of 50 signed prints for sale. Details of this, and of the Liberty Hall event, are at armaghpipers.com