The Rime of the Ancient Brexiter – An Irishman’s Diary 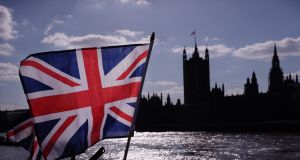 The Rime of the Ancient Brexiter (Scene: The entrance to a polling booth, somewhere in England, in the distant future. A trio of Eurosceptic voters is interrupted by a bearded old man, who looks like a strange mixture of Michael Gove, Nigel Farage, and Jacob Rees-Mogg. He grabs one of them by the hand.)

It is an ancient Brexiter
And he stoppeth one of three
“By thy long gray beard and glittering eye,
Now wherefore stopp’st thou me?”

He holds him with his skinny hand,
“There was a bus,” quoth he.
“Hold off! Unhand me, greybeard loon!”
Eftsoons his hand dropped he.

“The bus was cheered, the Bo’sun* steered,
From Finchley to Furness
Three-fifty millions we would save:
‘Let’s fund the NHS’.”
(*old nautical abbreviation for “Boris Johnson”)

The Sun came up upon the left
The Mail came up the right
And though the vote was sorely cleft
We won, and danced all night

The bus it powered on, pell-mell
On hardest Brexit bent
We’d triumphed, so we sent to hell
The forty-eight per cent

The ice was here, the ice was there
The ice was all around
The Bo’sun said if May were gone
We’d once-more forward bound

“God save thee, ancient Brexiter
What memory haunts thee thus?”
“I backed the Bo’sun’s plan at first,
Then pulled a double-cross!”

Yet still the sunlit uplands loomed
And soon the ice did crack
We passed the Irish Border line
With two words: “stop” and “back”

The back-stop was a hellish thing,
It warned – and would work woe.
If Dodds would fly behind our ship
The back-stop had to go.

And so we tried to ditch that stop
To th’ task we downward hunkered
But our enemies did anchor drop
Till we were Jean-Claude Junckered
Then the wind – alas! - it droppeth too
How to move we had no notion
Ours a tainted ship of state
Upon a tainted ocean

Day after day, day after day
No mast or top-sail flew
And all the while to Captain May
We were a ghastly crew

Yet flew we still the Brexit flag
For something drove us on
Till another spectre made us sag
Its name was Bercow, John

We tabled motions by the hour
The votes were chock-a-block
“Aye-aye”, “nay-nay”,
and so it went
“The ayes have it – unlock!”

But still no sign
of breakthrough came
The crew remained at odds
Until despairing – and for <EM>shame!
I shafted Nigel Dodds!

But now he grabbed the hand again
And bade once more be heard
He’d leave the Eurosceptic
With this, one final word:

“He playeth best, who loveth best
All creatures great and small
Yea – even the forty-eight per cent
God loveth them and all.”

The Brexiter, whose eye is bright
Whose beard is aged with hoar,
Is gone, and leaves the voter
Shook at poll-booth door

He went in like one that hath been stunned
His face was creased with pain
A sadder and a wiser man
He voted to remain.