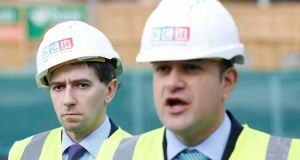 Minister for Health Simon Harris and Taoiseach Leo Varadkar: the children’s hospital cost overrun comes at the expense of other health and social services which try to control their costs. Photograph: Rollingnews.ie

The departments of health and public expenditure and reform have been given a month by the Government to prepare “an implementation plan” for the PwC report on the national children’s hospital.

The Government’s relentless determination to keep pouring concrete during the period of the PwC review indicates a determination to brazen this one out regardless of spiralling costs – never mind the absence of any cost-benefit analysis of alternative sites and investments.

Instead there will be some belated economic analysis by the lead departments on this spendthrift project. The eventual cost of the hospital is now projected to be as high as €2 billion.

The PwC report comes almost 1½ years after the first public alarm over the hospital cost escalation and the need for a fundamental review was sounded by the International Monetary Fund. The IMF warned, following one of its periodic reviews, that “discussions with departments and with the Department of Public Expenditure and Reform did not reveal any instances of fundamental review [of projects] having been undertaken, even though there seem to have been instances where this would have been appropriate, eg in the case of the national children’s hospital”.

The IMF also warned that “the non-binding nature of the Department of Public Expenditure and Reform review of appraisals on sanctioning authorities is a unique feature of Ireland’s system”.

Uniquely among 189 IMF member states Ireland allows this method of public project appraisal to prevail. Presumably it is comforting for those promoting projects with high-cost overruns in Ireland to know that they would be challenged by the departments of finance and treasury in every other IMF member state, but not in Ireland.

The IMF made several recommendations, including publication of the cost benefit analyses of projects to ensure weaker projects are prevented from progressing and the early identification of riskier projects.

They also called for the Department of Public Expenditure and Reform’s role as gatekeeper of the appraisal and selection process to be enhanced and for the Comptroller and Auditor General to carry out performance audits of major projects.

The IMF also said there should be biannual reports of lessons learned from the 10 largest projects.

The national development plan of February 2018 dismissed these and other reforms then proposed by the IMF. The plan surprisingly stated that the IMF “found a generally good standard of public investment management in Ireland”. Complacently, the plan also stated that “no change is proposed to long-established arrangements for oversight, monitoring and management of voted exchequer resources”.

IMF report – nothing to see here – move along please, was the message. The signals to the spending departments could hardly have been clearer. Happy days were here again.

Some 13 months later PwC has effectively endorsed the IMF’s position and contradicted the plan. It recommended that “the rules that govern public sector capital projects should be strengthened; that the standards to which business cases must adhere should be more clearly defined and robustly enforced and that a central assurance and challenge function should provide consistent challenge to and review of major projects through their life cycles”.

Among other things the children’s hospital project can be described as capital project management for slow learners. Hopefully the lessons have finally been heeded.

Ireland has increased public capital spending in a virtually full employment economy by a quarter in each of the last two years and routed it through a high-cost low-productivity construction sector.

This is a public sector rerun of the bank lending to the property sector before the economic crash. Ireland spends more than its rival economies on public capital spending and has topped up the spend as full employment beckoned.

Independent economic appraisal is steadfastly avoided thereby reducing our national competitiveness. Construction spending agencies have become skilled at avoiding individual responsibility for overruns and in the use of pseudo cost-benefit analysis for PR purposes rather than an independent appraisal of projects.

Hospitals are described by their promoters as “state of the art” and “world class” with no requirement to compare with much lower costs in other countries or on green field sites in Ireland.

The construction sector is laughing all the way to, and from, the bank.

Article 33.1 of the Constitution states that “there shall be a Comptroller and Auditor General to control on behalf of the State all disbursements and to audit all accounts of monies administered by or under the authority of the Oireachtas. ”

It is now time to implement that article to impose some control over public capital spending in Ireland. The children’s hospital cost overrun is a massive threat to the Irish economy, which faces international competition on home and foreign markets.

Since even Government spin doctors cannot spend the same euro twice, the cost overrun comes at the expense also of other health and social services which do try to control their costs.

Simon Harris and Paschal Donohoe have a busy month ahead to undo the complacency and torpor of the last couple of years.

I wish them well. Their country needs them.

1 Bank leaked my loan request to family who tried to rip me off
2 Spread of coronavirus triggers European travel curbs
3 Why Sinn Féin will not call the State by its name
4 What evidence is there that the IRA still controls Sinn Féin?
5 Costa living: ‘Move home to Ireland? I’d hate it’
Real news has value SUBSCRIBE