Irish writers have done more to promote Royal Ascot, surely, than English writers ever did 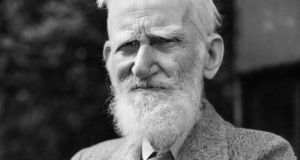 With Royal Ascot behind closed doors this year, there is even less risk of anyone being shocked by a vulgar cockney shouting at one of the horses: “Move yer bloomin’ arse”. Mind you, even with the added stress of coronavirus, it would take more than that now to make a female racegoer faint, as happened in My Fair Lady, after Eliza Doolittle’s interjection.

The line, and the Ascot scene in general, were an embellishment of the 1964 film. In the original play, GB Shaw’s Pygmalion (1913), the equivalent scene is in Professor Higgins’s house.  And there, his protégé horrifies the assembly by using the phrase “Not bloody likely!” which was even more risqué at the time.

Shaw wrote the part for his favourite actress, “Mrs Patrick Campbell”. But in repeating the line on stage, she was thought to be endangering her career. For London audiences, it caused the sort of frisson, if not the riots, that the word “shift” had done in Dublin during Playboy of the Western World.  For years afterwards, it required euphemism. Users of the B-word were said to have committed a “Pygmalion”.

With advance apologies for the indelicate segue, the subject of blooming arses leads me to Ulysses, wherein Leopold Bloom’s bathroom scene was one of many to shock the book’s early readers. I’m now engaged on a fourth ascent of the infamously difficult (it’s not really) work and, as on the last two occasions, I’m noticing things that had previously passed me by.

This time, for example, in the scene at the Freeman’s Journal offices, I was struck by a character’s suggestion that the English had a “cloacal obsession”.  The adjective relates to “sewers”. And the reason the phrase jumped out now is because I remembered it as a criticism of Joyce and the Irish, originally by HG Wells, but much quoted ever since.

Wells was writing not of Ulysses but of A Portrait of the Artist. And here’s what he said then (1917): “Like Swift and another living Irish writer, Mr Joyce has a cloacal obsession. He would bring back into the general picture of life aspects which modern drainage and modern decorum have taken out . . .”

Thus, when Joyce echoed the phrase in Ulysses (published 1922), he must have been returning an insult. During a debate on the relative merits of the ancient Romans versus other civilisations, he has Professor McHugh say this: “The Jews in the wilderness and on the mountaintop said: it is meet to be here. Let us build an altar to Jehovah. The Roman, like the Englishman who follows in his footsteps, brought to every new shore on which he set his foot [. . .] only his cloacal obsession. He gazed about him in his toga and he said: It is meet to be here. Let us construct a water closet.”

Shaw’s Pygmalion was inspired by a story from Greek mythology involving a king of that name who was also a sculptor. When he made a marble statue of his ideal woman, he fell in love with it.  So he had to plead with the gods to bring her to life, then married her.

I was writing last week about how the statue of William Smith O’Brien moved to Dublin’s O’Connell Street, where its neighbours include Jim Larkin.   Since then I have learned that Larkin’s sculptor, the late Oisin Kelly, was married to Smith O’Brien’s great-granddaughter.

This information comes from Joe Neville, a Fine Gael councillor from Kildare, who in turn is married to a granddaughter of that union.

The story is not quite Pygmalion. But as Joe says, it’s a “fun fact”.

Irish writers have done more to promote Royal Ascot, surely, than English writers ever did. Yes, Shaw’s contribution was indirect, via the film his play inspired. Even more tenuous is the fact that the record for most wins in the Ascot Gold Cup – four – is by a Irish horse called Yeats.

But Joyce made the race a sub-plot of Ulysses. Indeed, the extent to which it dominates Dublin conversations in 1904 is one of the small but defining changes of the intervening century. The modern Ascot has no such hold here.

One thing that hasn’t changed, surprisingly, is concern about gambling. You might think this a (justified) obsession of our times, when online betting is ubiquitous. But there’s Bloom in 1904, already concerned at the trend: “Betting. Regular hotbed of it lately. Messenger boys stealing to put on sixpence.” Fortunately, Joyce left us a permanent reminder that it’s a mug’s game. Nobody in his book backed the winner: the 20 to 1 outsider in a field of four.