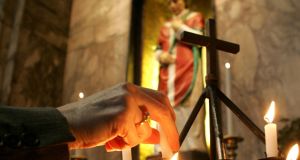 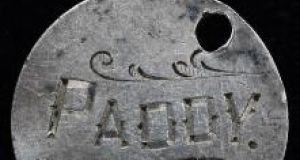 In the days before Valentine cards, there were love tokens, sometimes improvised from existing objects. And to add an extra layer of meaning to the term “legal tender”, these were often coins: ranging in the 19th century from a penny to sixpence, typically.

First a hole would be punched for a chain, and the original features erased. Then an engraver added a message, transforming the coin into poor man’s jewellery.

A poignant sub-genre was the convict love-token, left behind by a prisoner en route to Van Diemen’s Land or some other far-flung destination from which the path back to true love could not be expected to run smooth.

Even these must have been the basis for a minor industry once. As with the work of today’s card companies, the same rhymes recur, eg: “When this you see/Remember me/Tho’ many leagues we distant be”.

But presumably the engravers charged by the letter. So the commissioner of the coin displayed in the Irish Emigration Museum in Dublin must indeed have been a poor man.

Either that or he was one of few words. The only message on his coin is “Paddy”.

The biggest collection of convict love-tokens, not surprisingly, is in Australia’s National Museum. They include one from a William Holmes, “alias Dublin Bill”, who stole a gold pin in Coventry in 1844 and was caught when his wife tried to pawn it for some of the 10 guineas it was worth.

Dublin Bill won a one-way trip to Tasmania instead. As for Mrs Bill, she had to make do with an engraved coin bearing the message: “Dear Wife Forget Me Not”.

The same year that Martin travelled south, by coincidence, a man then and now synonymous with love and love tokens was journeying in the opposite direction

Then there was Peter Martin, a 30-year-old Dublin tanner and father of two who had emigrated to Gloucester, where there was a big leather trade, circa the 1830s, but who must have had to supplement his income there.

He was caught forging another man’s signature on documents and transported for life to New South Wales, leaving behind a Bristol penny with the soberly historical inscription: “A keepsake from Peter Martin tanner Gloster to Marcela Martin August 24 1836”.

The same year that Martin travelled south, by coincidence, a man then and now synonymous with love and love tokens was journeying in the opposite direction, albeit on a rather shorter trip, because he had started in Rome.

His name was St Valentine, and by 1836 he had been dead for 16 centuries. But for a Christian holy man, this was no guarantee of rest. So when an Irish Carmelite priest visited the Vatican around that time and mentioned a new church he had built in Dublin, the Pope gave him a prestige religious house-warming present to bring back: the relics of said saint.

Some of them, anyway. The location of supposed St Valentine relics situation is a crowded field. Parts of him are also claimed to be in Madrid, Prague, Vienna, the Greek island of Lesbos, and several other places. Also, his reputed head (separated from the rest of him in 269AD) never left Rome, where it is displayed behind glass in the Church of Santa Maria in Cosmedin.

But the relics brought back to Dublin by Fr John Spratt in 1836 did have impressive provenance and a covering letter. And the resultant shrine in Whitefriar Street Church remains the focus of a strong cult among tourists and the local faithful, who are encouraged to write their prayers and messages in a visitor’s book, anonymously or otherwise.

I’m not sure whether people are also encouraged to read these. But dropping by there yesterday, and being nosy, I did. And they make for a fascinating study of the human heart, in all its tortured emotions.

The messages range from complex pleas for better understanding of life (one this week was from a self-professed “atheist” who was nevertheless talking to the saint because the subjects of the message were believers) to the straightforward, eg: “Dear St Valentin. Just I want a good man. Thank you.”

But a surprisingly high number concerned familial rather than romantic attachments. One (signed) recent message reads: “My brother is so clumsy and he’s (sic) always messes up. Please find him a good girlfriend to take care of his soul.”

And some would not be out of place in the Irish Emigration Museum. Or at least I think that is the context of the following which, accidentally or otherwise, had been addressed to “St Anthony”. The message read: “Please [...] help us to get our daughter and granddaughter back, as it is breaking our hearts to go on without them.”

1 Son putting elderly dad under pressure to sign over land
2 Covid-19: Museums, cinemas set to reopen next week as Varadkar warns of New Year restrictions
3 Stir-crazy Dutch holidaymakers set to descend on Caribbean island
4 Irish tax policy is now a human rights issue for the UN
5 Alison Curtis: My guilt at not going for a second pregnancy
Real news has value SUBSCRIBE