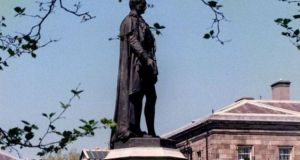 There was an interesting juxtaposition of events involving public commemoration this week, first at Dublin Castle, then Leinster House.

In the latter, an Oireachtas committee considered evicting a statue of Prince Albert as an unwanted relic of Ireland’s colonial past. The idea was rejected in the end, partly because the Oireachtas doesn’t own the monument, although members also argued the principle that the past is complicated and that statuary should reflect this.

Meanwhile at the castle, in an example of how winners write the history books, suffragette heroine Hanna Sheehy Skeffington was being commemorated with a new plaque at the place where, as the English half of the inscription put it, she had once “smashed these windows” in support of female emancipation.

This would have been popular with the public now anyway. But the plaque’s appeal will only be increased by its inclusion of the more poetic, Irish version of what she did: “a rinne smidiriní de na fuinneoga seo”.

As @AnDuinnineach, a Twitter tribute to Dineen’s Dictionary put it, the plaque is “even better as Gaeilge”.

Others agreed. “Smidiríní has long been my favourite Irish word to say”, commented one tweeter, while a second pointed out that “this is the origin, just in case it isn’t obvious, of the English word ‘smithereens’.”

Well, actually, it is and it isn’t. As often with language, which is even messier than history, there are chickens and eggs involved here. For although smithereen is generally considered an Irish gift to English, it may have similarities with the word craic, which was born in England as “crack” but moved to Connemara in the 1970s and changed its name.

Certainly, the “een” part of Smithereen is classic Hiberno-English, from the Irish diminutive “ín”. The “smither” bit, however, may be just as English as it sounds. The Oxford English Dictionary thinks so, anyway, suggesting “smithers” already meant “small fragments” before the Irish further shattered them.

Against that, Terence Dolan in his Dictionary of Hiberno-English, suggests “smithereens” is recorded earlier in English than “smithers”, and also counters the latter with the “Anglo-Irish” verb to smither, meaning “break in bits”.

But he points out that English has “smattering” too, along with “smaddereen”, a dialect version of same. And just to complicate things, Dolan also throws in a present-tense version of smither: as used, apparently, during a UTV news report in May 1999.

I don’t know what exactly was happening in Northern Ireland then, but whatever it was, the parties were said to be “smithering”.

Another thing that has often ended up in smithereens, of course, is Irish statuary, especially when it commemorates former overlords

While we’re at it, I would be disappointed if, somewhere in the world, people with the surname Smithers (like Mr Burns’s lackey in The Simpsons) do not call their children “Smithereens”.

Either way, I can at least confirm that “Smithereens” is what residents of the West Virginia town of Smithers (population 813) call themselves.

Another thing that has often ended up in smithereens, of course, is Irish statuary, especially when it commemorates former overlords. But then the problem with statues, unlike words, is that they don’t mutate so easily, to blend in with changing local conditions.

Mind you, the creator of the Leinster House Prince Albert, John Hughes, was a Dubliner.

And when he also got the job of reproducing Albert’s wife, Queen Victoria, for the same location in 1904, he did his best to give her an Irish accent, or at least shamrocks and a few other humanising touches.

Alas it didn’t work. She was removed in 1948 and, four decades later, transported to Australia.

We should after all be able to absorb a few colonists’ statues as well as we did their language, which we have sometimes shamelessly appropriated by nothing more than altering a vowel

Prince Albert of Saxe-Coburg and Gotha is now also out of sympathy with his surroundings. Indeed even in Britain, his descendants had to change their name to “Windsor” in 1917, when it was too German for comfort.

He would soon seem even more out of place in Dublin, despite being partly camouflaged by a hedge.

But there are not that many of his kind left here now and, ownership issues aside, the Oireachtas did the right thing in deciding not to oust him.

We should after all be able to absorb a few colonists’ statues as well as we did their language, which we have sometimes shamelessly appropriated by nothing more than altering a vowel.

I’m not thinking only of craic. An even better example is feck, whose origins were just as Anglo-Saxon as Prince Albert’s. Then at some point it it moved here and went native, dropping its “u” for an “e”.

Now, not only is it Ireland’s national swear-word, we’re also increasingly exporting it back to the UK, as a more socially acceptable version of the original.