Dublin World Meeting of Families shows no tolerance of LGBTI+

Bishops clear on protecting unborn but why not those alive who are LGBTI+? 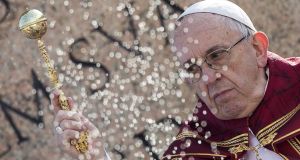 Pope Francis: organisers of the World Meeting of Families have removed his inclusive language on the family and LGBTI+ pictures from their pamphlets, and deleted references to gay families by a bishop in the catechesis. Photograph: Angelo Carconi

Earlier this month, when asked about separation between the Catholic Church and State, the Taoiseach said “I do believe in that separation, it can’t be à la carte – you can’t believe it when it suits you and not when you don’t . . . I don’t think it is the role of the State to tell any religion what rules it should make.”

In an ideal world, the Taoiseach’s argument makes perfect sense but we don’t live in an ideal world. The Catholic Church in Ireland is not a private club. It is deeply embedded in nearly every aspect of our lives, particularly in education.

The Catholic Church is patron of over 90 per cent of the primary schools in Ireland. In the Diocese of Meath alone, 191 primary schools fall under the patronage of Bishop Michael Smith.

The Diocese of Meath is also home to the parish of Coole. In that parish’s bulletin of March 3rd last, it promoted an organisation called Courage International which is about the business of providing conversion therapy for homosexuals.

Shockingly, in 2012 one of its founding members Fr Benedict Groeschel, said: “Suppose you have a man having a nervous breakdown, and a youngster comes after him. A lot of the cases, the youngster – 14, 16, 18 – is the seducer”. Fr Groeschel subsequently apologised but his choice of words cannot be explained away as clumsy language.

The very idea that conversion therapy exists or is legal in 2018 will surprise many. However, it is unsurprising that its main proponent is the Catholic Church – an organisation that in Ireland doesn’t even recognise the existence of homosexuals in its guidelines for schools.

The Irish Bishops Conference has a 16-page document on sexuality education which, as the Primate of All Ireland Archbishop Eamon Martin explained to me, is “intended to outline the principles to inform all aspects of such teaching in Catholic schools”.

Nowhere in this document will you find any mention of the existence of LGBTI+ ( Lesbian, Gay, Bisexual, Transgender or Intersex) people. It is a document that provides for the existence of one type of sexuality – heterosexuality.

In fairness, the bishop’s document is consistent with Cardinal Joseph Ratzinger’s 2003 decree as head of the Congregation of the Doctrine of the Faith in which he stated that “homosexuality is a troubling moral and social phenomenon”.

In August, the World Meeting of Families takes place in Dublin. Last October, Bishop of Limerick Brendan Leahy said that it should be an inclusive event for all families, including gay families. He said about family: “It anchors us in life, defines us. It’s comfort when we are in difficulty and the first place to go to celebrate.”

I got married last year and our final stop on honeymoon was to a group of nuns that I’ve known for years. They didn’t mention church doctrine or conversion therapy – they just saw us as a newly married family.

Over a lot of tea and buns, all they wanted to hear about was the ceremony, the dinner and dancing and to see as many photos as possible. It was Pope Francis’s exhortation Amoris Laetitia in action.

However, my wedding photographs have no place at the Dublin World Meeting of Families (WMoF2018). In the last three months, the organisers of the WMoF2018 have shown a staggering zero-tolerance policy towards the LGBTI+ community.

The organisers have removed inclusive language on the family by Pope Francis and LGBTI+ pictures from their pamphlets, and deleted references to gay families by a bishop in the catechesis.

Despite these actions, the event organisers claim that the LGBTI+ community is welcome – provided of course we’re not seen or heard.

The consequences of being not seen or heard can be seen in a 2016 study into the LGBTI community carried out at Trinity College. It found that 56 per cent of LGBTI+ 12-18 year olds had self-harmed, 70 per cent had suicidal thoughts and one in three had attempted suicide. These are devastating statistics.

Our experience in school can make or break us and the Catholic Church, the Minister for Education and the Government have a duty of care to all children in our schools – including those who identify as LGBTI+.

I wonder how that duty of care is served by a young LGBTI+ sitting in the parish of Coole on March 3rd last reading a promo for Courage International which promises to fix him or her.