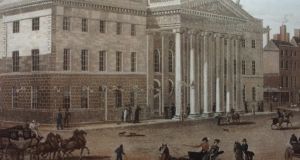 The idea of taking over a post office and using it as a base to declare the Irish Republic did not, it seems, start with Patrick Pearse. Back in 1798, Napper Tandy had a broadly similar idea. It’s just that circumstances forced him to do it a long way from Dublin. And it was a long shot in general, the main part of that year’s French invasion having already failed.

Even so, on September 16th, Tandy and the French general Rey landed with troops on Rutland Island, aka Inishmacadurn, just off mainland Donegal. They hoisted a flag there with the slogan “Erin go Bragh”, then seized the post office, brandishing copies of a proclamation headed “Liberty or Death”. The document was signed by Rey: “Northern Army of Avengers – Headquarters – the first year of Irish Liberty”.

After requisitioning “a cow and two pigs” for their catering needs, the occupiers considered their position. It was not good. The news from the south was that Gen Humbert had surrendered. So, reluctantly, they sailed out again, but not before paying for the supplies, leaving a letter exonerating the postmaster for failing to deliver that day’s mailbags, and (in Rey’s case), taking a gold ring from his own finger and presenting it to the postmaster’s wife.

This is just one of many fascinating vignettes in The Post Office in Ireland: An Illustrated History, by Stephen Ferguson, which I helped to launch on Monday at a venue 158 miles southeast of Inishmacadurn, ie the GPO. That, of course, is where a later generation of insurgents launched their uprising, somewhat more successfully, albeit with even worse disruption of the mail service. Its role in supplying rebel headquarters apart, as Ferguson’s book explains, the post office network has been inextricably entangled not just with Irish history in general but with the plotting of revolution in particular. This is partly, of course, because mail was long an important source of intelligence gathering by official snoops.

Such spying was sufficiently well known in the 1790s that an exiled Wolfe Tone, writing from The Hague, warned his correspondents to avoid mentioning in letters even “a syllable that they would not wish to see in the [newspapers]”.

He was in no doubt the “English government has found in the post office of the republic some scoundrels base enough to betray their country and violate the sacred right of private correspondence.” And in sarcastic vein, he added: “I hope they may open this likewise – the rascals!”

So a century later, those using the post for seditious purposes sometimes resorted to code language, which in turn forced the official spies to be more creative. Occasionally, in the effort, their imaginations overstretched.

Another of Ferguson’s stories concerns the “Paris Letter” of 1884, written to a hotel in that city by a Dublin journalist and Fenian, but intercepted by the famous G-man, John Mallon.

In a subsequent court case, it was alleged that the document was a “cipher letter”, which enabled other coded letters to be translated. It was specifically claimed that the term “unmilked cow” was the key to unlocking the mystery.

Unfortunately for the prosecution, this left them open to ridicule by the defence, whose bovine jokes cracked (up) the courtroom, while leaving the code intact.

Although the charges were not pursued, investigators may at least have been in the right general field. Evidence suggested that there was some kind of secret language at play in which “cows” meant “rifles”, “calves” meant “revolvers”, and “farmers” referred to people who, if let, might take over post offices and declare republics in them.

Not that the people already working in post offices were immune from revolutionary intent. On the contrary, several prominent figures from the 1916-23 era had served time as postal officials, including Michael Collins, Sam Maguire, and IRB Supreme Council member PS O’Hegarty (his initials stood for Patrick Sarsfield), all of whom worked in the London post office.

O’Hegarty survived to become secretary of the new Free State’s post and telegraphs service. As such, he oversaw an era in which postal pillar boxes, introduced in the 1850s by Anthony Trollope, became one of the most visible expressions of independent Irish identity.

For a while, to the chagrin of the country’s remaining monarchists, royal insignia were removed. But that didn’t last, and many of the VRs and ERs survive to this day. The State was content just to repaint the boxes from red to green, although as Trollope would have known, in both Britain and Ireland, they were all green originally.

4 Beyond the guidelines: How not to get Covid-19 this weekend