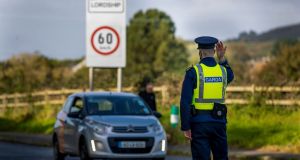 Members of An Garda at a checkpoint on the R173 in Co. Louth at the Loughanmore area close to Carlingford. Liam McBurney/PA Wire

The current legal framework for dealing with Covid-19 - the ministerial power to introduce regulations under the Health Protection and Preservation of Life Act 2020 - will expire on November 9th. When this legislation was rushed through the Oireachtas back in March, the Irish Council for Civil Liberties and opposition parties argued that the extraordinary powers vested in the Minister for Health under this Act to regulate movement, work and other aspects of ordinary life must be tightly regulated and time bound. This argument was accepted by Government and it conceded that the Oireachtas must retain control over the duration and extent of these extraordinary powers.

While the public and the Oireachtas accepted that there must be some restrictions to combat this contagious disease, the condition for sacrificing certain rights and freedoms was that government action must be subject to parliamentary oversight. That essentially is the social contract of the pandemic, and the inclusion of a ‘sunset clause’ in the legislation, rather than the original proposal for indefinite government extension of powers was a crucial democratic protection.

Fast forward seven months, and with no end in sight to the pandemic, the Government will today propose to extend these extraordinary ministerial powers with the bare minimum of two hours debate in the Dáil. This is a direct affront to the democratic safeguards the Oireachtas inserted back in March. In railroading this motion through now, the Government is also saying to the Irish people that it has nothing to learn about how these powers have been exercised since March, and does not feel compelled to explain how it proposes to use these powers in the future.

Many of the more than 20 regulations introduced under the Act have been reasonable and proportionate, but others have been poorly conceived. Proposals to criminalise gatherings in private homes, or requirements on pubs to retain records of food consumed have had to be withdrawn. Many of the regulations were not published before they came into effect and it is particularly regrettable that the Government has consistently chosen not to consult with the Oireachtas or expert bodies about the content of these regulations.

When the Oireachtas Special Committee on Covid-19 Response reviewed the body of regulations it found that there were significant structural deficiencies in terms of the democratic process by which many of the measures were introduced, and particular failures on the part of Government to explain clearly to the public the necessity and proportionality of the various measures introduced. These failings in legislative practice risk undermining public confidence in the necessity and proportionality of the measures.

The Government has been presented with a series of practical recommendations on how it can strengthen its own legislative process, including by allowing for greater consultation with the Oireachtas which will help iron out some of the drafting problems we have seen over recent months. It has also received positive recommendations as to how it can evaluate the impact of any regulations on the public in advance. All of these recommendations would strengthen public support for the public health effort, and it is difficult to understand why Government would not wish to consider how it might do better in the future.

With recent proposals for an extensive system of fines, we are now also seeing a worrying shift towards enforcement and punishment which risks feeding into a discourse of recrimination, stigmatisation and divisiveness.

Contrary to media reports, fines were never recommended by Nphet. The Garda Commissioner and Minister for Justice both expressed scepticism about them. The available research from academic experts and the experiences of neighbouring jurisdictions shows that fines are ineffective in affecting public health behaviour. They are primarily measures of punishment and blame. And yet, as the number of cases increases again, Government seems intent on reaching for punitiveness over solidarity measures.

Liam Herrick is the Executive Director of the Irish Council for Civil Liberties.