Matching Funds – Frank McNally on the ‘Charlton Charity’, a labour of love for loving labourers 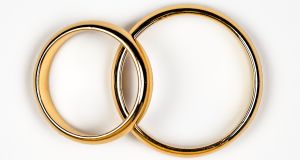 Thomas Charlton (1702–1792) used his will to improve the chances of others. His bequest provided a kind of seed-funding for start-ups, except that all the start-ups were weddings

As mentioned in John Connell’s The Running Book, which I reviewed elsewhere in this paper recently, Co Longford may once have been home to the real-life model for Jane Austen’s Mr Darcy.

The Limerick-born Tom Lefroy was a young law student when he and the author became amorously involved, at a time when she was writing Pride and Prejudice. A competing theory about his influence, arguably even more interesting, is that Austen gave his gregarious personality to the book’s female protagonist, Elizabeth Bennett, while saddling Mr Darcy with her own, more reserved manner.

In any case, their real-life relationship was doomed by social economics. Lefroy needed to marry up in the world – a bill Austen didn’t fit.

And both she and romantic fiction were probably better off without him, because he went on to become a deeply unattractive figure – a rack-renting landlord, religious bigot, and overpromoted lawyer, who eventually manoeuvred himself into the post of Irish chief justice.

But Longford landlords were not always so unsympathetic. And as Connell’s book also notes, albeit fleetingly, they included a man who has done more than most to smooth the path of romance. Frustrated in love himself, it seems, Thomas Charlton (1702–1792) used his will to improve the chances of others. His bequest provided a kind of seed-funding for start-ups, except that all the start-ups were weddings, in his native Meath and the neighbouring Longford, where he also owned property.

Accounts of the charity’s origins agree that Charlton was a man of great wealth, who took a notion, when aged 75, to get married and acquire heirs. For whatever reason, this wish was thwarted. Connell writes elliptically that either the “young bride died” or that the marriage was “otherwise prevented”. Elsewhere, however, I have seen the suggestion – equally elliptical but more sinister – that on the eve of the wedding, members of his extended family ensured he was “forever prevented from being a father”.

Whatever that means, it may have lent an element of revenge to his subsequent will, which provided that profits from his estates be put aside to provide grants of £6 16s 6d to the sons of farm labourers marrying the daughters of farm labourers in the counties mentioned. An added curiosity of the scheme, especially considering his own late wedding plans, is that while the upper age for male applicants was 30, the on-the-shelf-life of eligible females was much higher, at 40.

Alas, it seems that the path of true marriage sponsorship does not run smooth either.  Restrictions imposed by the will were such that by the mid-1800s, administration of the fund had become “almost impracticable”. At one point, there was a backlog of more than £5,000 in undistributed funds.

So after a series of legal adjustments, a notice published in The Irish Times in 1877 declared that when there were insufficient applicants from Meath and Longford, funds could also be extended to “Cavan, Monaghan, Louth, Dublin, Kildare, King’s County (now Offaly), Westmeath, Roscommon, and Leitrim”, and that the payments could be increased to £25 in some cases.

That must have eased the logjam. A report a few years later found that in 1877, there had been 520 applicants, although a mere 119 of those were successful.

Another question considered by the courts had been the scheme’s religious break-down. In its earlier years, requirements included the certification of marriage by a Church of Ireland minister. But from 1877, at least, while Protestant applicants still got priority, Catholics were allocated three-fifths of the available money.

At a hearing in 1895, counsel for the Catholic Church argued that this was still disproportionate and that a fifth would be more than enough for minority religion. The court heard that “the object of the founder was not a sectarian one, but that his intention was to benefit day labourers [in general]”. To this end, counsel pointed out, “the number of Roman Catholic day labourers […] especially in the County of Meath, was greatly in excess of the number of Protestant[s]”.

The scheme was not further amended then. But in one form or another, it was still funding marriages well over a century after the benefactor’s death.

As late as 1924, the last time I can find the charity mentioned in this newspaper’s archives, it was for its contribution to Catholic marriages in particular.

A Catholic sub-committee managing the grant had paid out £8 each to 22 “bona fide farm labourers” in Ballymahon, Longford, Edgeworthstown, and Granard.

1 Covid-19: Museums, cinemas set to reopen next week as Varadkar warns of New Year restrictions
2 Stir-crazy Dutch holidaymakers set to descend on Caribbean island
3 Bloomberg ranks New Zealand top in fight against Covid-19 - but how did Ireland fare?
4 Alison Curtis: My guilt at not going for a second pregnancy
5 Tánaiste says third short period of Covid-19 restrictions may be needed in New Year
Real news has value SUBSCRIBE