Prolonging Netanyahu’s premiership may come at a cost for Israel 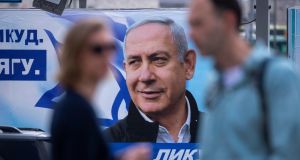 A billboard of Israeli prime minister Benjamin Netanyahu in an election campaign poster in Russian, in Jerusalem, on Friday. Israelis go to the polls in a general election next Tuesday. Photograph: Jim Hollander?EPA

Like any successful politician, Binyamin Netanyahu recognises the value of being underestimated. For him, it’s been a recurring theme.

In the 1980s, as he plotted his rise through the Likud party, internal rivals dismissed him as a lightweight. When then prime minister Yitzak Rabin was assassinated in 1995, critics accused Netanyahu of incitement and predicted he could never recover his standing.

Again and again he was written off: a sex scandal and corruption charges in the early 1990s; the Likud split that produced Ariel Sharon’s Kadima; defeat at the ballot box in 1999; and the formation of a broad centrist alliance designed to defeat him at the 2015 election.

Each time he survived, saw off rivals, and returned to power. Netanyahu is Israel’s second-longest-serving prime minister.

If his right-wing nationalist-religious bloc wins the election next Tuesday, he will be on course to beat the record set by the country’s founding leader, David Ben Gurion.

On paper, the obstacles standing between Netanyahu and that milestone are among the biggest he has faced.

His two chief opponents, retired army chief of staff Benny Gantz and the former TV presenter Yair Lapid, have come together under a new centrist banner, Blue and White (after the Israeli flag), hoping to win support from right-wing voters disaffected with “Bibi”, as he is widely known in Israel. Some opinion polls have placed the new alliance above Likud.

Nearly 60 per cent of Israelis tell pollsters they would like Netanyahu to go. Meanwhile, his legal problems are mounting. Just weeks before polling day, attorney general Avichai Mandelblit – a Netanyahu appointee – recommended that the prime minister be indicted on charges of fraud, bribery and breach of trust in relation to three separate corruption cases.

He is alleged to have accepted expensive gifts in return for political favours and to have intervened in regulatory decisions on behalf of a telecoms company in return for favourable coverage from a popular website owned by the same company. Netanyahu denies the allegations and has refused to step down.

Instead, he has ratcheted up his shrill attacks on rivals real and imagined – the media, “the elite”, Arabs, democratic institutions and a leftist deep state he claims is plotting against him.

Yet Netanyahu, despite everything, is still the favourite to lead Israel’s next government.

The Gantz-Lapid campaign’s early momentum has fizzled out. Polls may suggest widespread dislike of the incumbent, but they also show people struggle to see a better alternative.

Netanyahu has responded to the centrist consolidation by shoring up his own potential coalition – most alarmingly, by pressuring his allies in Jewish Home, a religious-nationalist party, to include in its candidate list representatives of the racist Jewish Power outfit – widely regarded as the offshoot of a party the US state department designated a terrorist organisation.

To Anshel Pfeffer, a Haaretz journalist and author of a new biography of Netanyahu, the reasons for the man’s endurance are plain: he has delivered on his promises.

As Pfeffer points out, Israel’s economy is flourishing, its people feel relatively secure, it has not been drawn into long and costly wars and its relations with many Arab states – thanks partly to their shared hostility to Iran – are stronger than ever.

Today, Israel is under virtually no international pressure to compromise with the Palestinians.

But Netanyahu’s political longevity will come at a cost for Israel and for the region. His denigration of democratic institutions, his willingness to play the racist card, his authoritarian streak and his cynical alliances with populist autocrats risk long-term damage to the country.

Some of that damage might be repaired. But by giving mainstream legitimacy to voices that were once considered dangerously extreme, Netanyahu has set in train a process that cannot simply be reversed when he leaves the stage.

His successful lobbying of the US to repudiate the Iran nuclear deal will prove self-defeating, while his enthusiastic embrace of the US Republican Party, while helping him in the short-term, threatens the US bipartisan consensus that has been so helpful to Israel since its foundation.

Strikingly absent from the Israeli election campaign has been any serious debate on the occupation of Palestinian territories.

Netanyahu’s policy has been to “manage” the situation – another way of describing an entrenchment of the status quo. Again, that has short-term appeal to Netanyahu.

But Israel is no closer to answering the fundamental question it faces – whether it is to be a Jewish state or a democracy – than it was when Netanyahu first took office. Meanwhile, he holds two million people locked up in Gaza and uses force to impose what looks like a policy of permanent occupation in the West Bank.

Netanyahu calculates that he can avoid paying a price for that. More likely, the reckoning has only been deferred.