Some Man for a Row? Not Really – Frank McNally on a hero of the uilleann pipes, Leo Rowsome 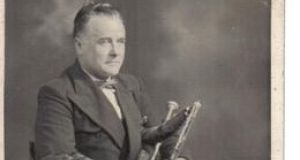 I have long thought that the surname Rowsome was an adjective waiting to happen. After all, English already has many words ending with the same suffix, including awesome, fearsome, handsome, and troublesome. Speaking of troublesome, the list also extends to fulsome, which seems to be especially popular with people who don’t know what it means.

There could be no such confusion with rowsome, provided the “row” was pronounced as in “rowdy”, and not as in the other kind of row: the one involving houses or ducks. In the former sense, I can imagine people complaining of rowsome neighbours, or rowsome pubs. The term would be especially valuable in court reports.

But remarkably, it seems never to have been used anywhere yet, even in Irish-English. And this itself must be a tribute to the only family I know of with the surname: the musical Rowsomes, of which the late Leo was most famous. For even though their “row” is indeed pronounced as in “rowdy”, the only racket they have ever been accused of creating was a tuneful one, usually on the uilleann pipes: so much so that the surname and that instrument are now synonymous.

Of the many some-suffixed adjectives that so exist in English, meanwhile, his near namesake growsome (“tending to make things grow”) may be the one that best applied to Leo.

For much of his lifetime, the instrument he mastered was threatened with extinction. Towards the end of his days, he was the only person anywhere still making uilleann pipes. He might have become the last of those Mohicans had the tide not started to turn by then.  But it is in large part due to his life of playing, teaching, and crafting the instrument that, half a century later, it is now thriving, with thousands of players worldwide.

As his students went forth and multiplied, he was also growing his own family, three generations of which have now succeeded him, with many pipers in their ranks too.

I know this because I was talking to one of them only this week: his daughter Helena, now living in Comber, Co Down, and a pipe player herself.

She it was who set me straight on the surname’s pronunciation. She also explained that it is of Huguenot origin, coming to Dublin via Wexford. And she reminded me that although Leo may be a pioneering musician, he didn’t lick the talent off the ground.

His father William played and made the instrument too, while his grandfather Samuel was a famous enough piper to feature prominently in the writings of Francis O’Neill, the Chicago police chief and music collector who himself helped keep the tradition alive into the 20th century.

These and many other things will be recorded in a biography of her father that Helena hopes to publish before next year’s 50th anniversary of his death.  That sad event, in September 1970, had particular poignancy for her: he had played at her wedding only weeks before.

But maybe in the very circumstances of his demise there was consolation. In the poem The Fiddler of Dooney, WB Yeats has the eponymous musician assured a greater welcome in heaven than his more pious brother and cousin: “When we come at the end of time/To Peter sitting in state,/He will smile on the three old spirits/But call me first through the gate.”

Well, Leo Rowsome was in Sligo, adjudicating the 1970 Fiddler of Dooney competition – itself part of the folk revival he had helped inspire – when he died, aged 67. A place in musical paradise was surely guaranteed.

Helena is reluctant to blow another instrument – the trumpet – about her father’s greatness. She likes to think that even if they weren’t related, she would want to promote the memory of a man who worked so long and hard (with heroic management by her mother) for the thing he loved, a role now at risk of being forgotten. In this spirit, she quotes what an unrelated piper said to her recently: “If Leo Rowsome had been born in any other country, there would be a monument to him in the equivalent of O’Connell Street”.

Probably. But speaking of streets, I wonder if there is a case for naming one of Dublin’s shorter thoroughfares after him instead. I’m thinking of the one that houses the former Dublin College of Music, where he taught for decades. It’s called Chatham Row now, a name already catered for in the adjoining Chatham Street. So why not rename the former “Rowsome Row”?  That would have an obvious ring to it, albeit at the risk of being misunderstood sometimes, especially in court reports.