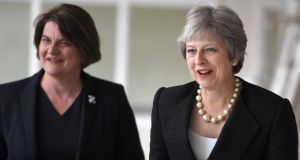 DUP leader Arlene Foster and British prime minister Theresa May. “There is no functioning government in Northern Ireland simply because of the failure to implement the Belfast Agreement and subsequent agreements in its wake.” Photograph: Clodagh Kilcoyne/Getty Images

This is shaping up as one of the most dangerous times for the Belfast Agreement since it initially bedded down. It would be all too easy to tear it apart.

The recent attacks on the homes of senior Sinn Féin figures Gerry Adams and Bobby Storey were warning shots about verities that the Troubles would never flare again. There were also clear and troubling signals during several nights of rioting and shots taken at policemen in Derry during the July 12th week.

The message was that they haven’t gone away, you know – they being republican dissidents who have never accepted the agreement. They remain highly marginalised but their existence remains a worrying reality 20 years after the Belfast Agreement

The Adams attack from a moving car smacks of a copycat attack to what happened in Derry where dissidents fired at police. A few Belfast dissidents most likely wanted to make their presence known.

Add into the inflammatory mix the right-wing Tories in Britain such as Jacob Rees-Mogg and Boris Johnson – who would gladly enforce a hard border and risk starting the war again if they got a hard Brexit – and you have a toxic cocktail.

There is no functioning government in Northern Ireland simply because of the failure to implement the Belfast Agreement and subsequent agreements in its wake.

In the vacuum unionists seem blissfully unaware that their demographic destiny is as a minority in Northern Ireland and their need to secure their future in an agreed Ireland should dictate their thinking, rather than more of the “No Surrender” catchcry.

Perhaps they have been lulled into a false sense of security by the fact that the British government has clung on to power with the help of the Orange card, but that arrangement looks increasingly tenuous. Unionism needs a plan for the future, not a slogan born long ago in a Finaghy field.

It is an especially vulnerable moment for Sinn Féin, which is seeking to settle in two new leaders, Mary Lou McDonald in Dublin and Michelle O’Neill in Belfast – faces of the future as the legendary leadership of Adams and Martin McGuinness becomes part of the past.

No matter how talented and resourceful the new leaders are, they will never match the authority Adams and McGuinness had as they defused militants during the long march to the Belfast Agreement.

Indeed the rioting in Derry would likely never have happened if McGuinness was still in situ. We realise by their absence the incredible impact that men such as McGuinness and the indisposed John Hume had in keeping that city stable.They are simply irreplaceable.

The rioting in Derry is a warning that what seems the very cradle of stability in Northern Ireland can spring wide open like a sprung lock.The hope, of course, was that the handover to the new generation would occur with the Troubles firmly in the past, However, the weeks around July 12th showed there are still flickering embers on both sides.

A key also lies in Irish America, where the Adams/McGuinness peace policy famously won over those who had once evinced very hard lines on the North. It took an enormous amount of work by republicans such as the late Joe Cahill and the highly respected veteran Rita O’Hare, who handles North America for the party and is tireless in recognising the need to be constantly vigilant.

There is one weekly dissident show on WBAI in New York called Radio Free Éireann, but to date there hardly seems to be any stirring in the major Irish cities away from the hard-won peace strategy.

That has not stopped some leading dissident figures from trying. Frequent visits to the United States were made probing for an opening, especially financially, but to no avail so far.

But that could change. The lack of a US envoy to help deal with the government shutdown talks and the absence of a US ambassador in Dublin have led to a widespread sense in White House circles that Ireland is hardly worth caring about, which sends its own dangerous signal. The belief is that it is settled and, barring occasional ripples, well on it way to final resolution.

But still waters run very deep in Ireland. We have emerged from one dark tunnel but another tunnel may beckon There should be no room for complacency, as the events around July 12th make clear.

Restoration of government, resolving Brexit without a hard border and ensuring international attention, especially from the US on the issue, are vitally important.

One can envisage a coming together of events where a disastrous sequence – most notably a hard border Brexit – could inspire another generation to take up arms.

That would surely lead to a renewed effort by militants to exploit the anger and distrust such a development could signal. Police at a hard border are sitting ducks. The consequences would be disastrous.

It could never happen? Planning for the worst would have made you prescient in Irish politics. A 1968 civil rights march in Derry turned into a 30-year conflict. A bullet from a gun at Béal na Bláth changed an entire country forever. Very few in their right mind wanted the Troubles or the Civil War, yet both almost inexplicably happened. “Events, dear boy, events,” as Harold MacMillan is reputed to have replied when asked what was the most difficult thing about being prime minister.

When it comes to Ireland’s past the biggest fiction for the future could be that it will never happen again. The price of peace is eternal vigilance. We must learn the lesson that while the effort undertaken to bring about peace was superhuman, with heroics on all side, tearing something down needs far less effort. It should never be allowed to happen.

1 Man tested for symptoms linked to coronavirus in Belfast
2 A vegetarian and a non-drinker visit Ireland: here’s their verdict
3 Fintan O’Toole: Historians will not believe sheer ignorance of Brexit supporters
4 Child (4) died of viral infection following nap at Cork creche
5 Cycling or swimming, walking or yoga: What is the best exercise for you?
Real news has value SUBSCRIBE