Equality, respect and sense of belonging vital to LGBTI+ people 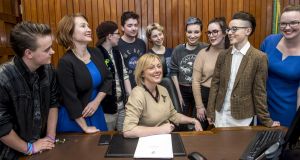 Access to legal gender recognition for young transgender and non-binary people was a key recommendation of the report from the review of the 2015 Gender Recognition Act. The latest announcement by the Government to allow this to happen should serve as a catalyst to help move Ireland towards a position where soon trans, non-binary and intersex people will all feel equal and respected and that they belong.

The process of gender recognition for under 18s is poised for historic reform following the recommendations made as part of the review of the Gender Recognition Act 2015, commissioned by Minister for Social Protection Regina Doherty. The recommendations on legal changes, which include a simplified administrative process for gender recognition of children with parental consent and legal recognition for individuals who are non-binary or intersex, are informed by those affected themselves and by relevant involved advocacy groups, and legal and medical experts.

The implementation of the report’s recommendations would change the lives of trans, non-binary and intersex young people across Ireland. It would send a strong message that they are visible, valued and included in Irish society. Trans young people and their families tell us how vital it is to their everyday lives to have access to legal documents which reflect their true gender, such as passports, birth certificates and other official records. Basing legislation on self-determination reflects that this is a legal process and therefore there is no requirement for medical experts, medical treatments or diagnosis of a mental disorder for individuals to be legally recognised.

The report comes after a robust public consultation process which began in January 2018 and received 92 written submissions from an array of sources, individuals, families, professional, advocacy groups and members of the Oireachtas.

The public consultation and engagement to produce these also included meetings with the transgender community including young people, parents of transgender children, medical practitioners and legal experts. Some 92 groups submitted to the consultation process including 50 transgender and non-binary youth members of BeLonG To who engaged in a year-long consultation process. The consultation was detailed, hugely inclusive and makes these recommendations informed, well-versed and cognisant. The findings were broadly supportive of a more simplified and flexible arrangement for those aged 16-17 and supportive of extending provision for gender recognition to people who identified as non-binary.

During the course of the review process, we heard on a number of occasions that young trans people do not just wake up one morning and decide that they want to change their legal gender. This happens after a period of social transition, living in their preferred gender. What is clear from the young trans and non-binary people that we heard from is that having access to legal gender recognition will have a hugely positive impact on their self-esteem, self-worth and wellbeing.

Every day, I heard from young people, parents, and teachers about these challenges, including not being allowed to use their preferred name or pronoun at home or in school, not being able to access appropriate healthcare and support including mental healthcare, and not being able to legally change their name or gender markers, forcing them to come out against their will. Listening to the voices of the young people emphasises the growing need for simple, easy-to- access legal gender recognition without financial barriers in order to truly support them as they journey to their true gender identity.

Equal recognition sends a strong message to LGBTI+ people that we are equal citizens, we are valued and we belong. As well as equal status, it also addresses the practical realities of citizens’ lives such as protections for families and access to identification. We know that unfortunately it does not end the anti-LGBTI+ stigma deeply rooted in Irish society. LGBTI+ people continue to experience social exclusion, isolation, fear of rejection, bullying, and violence because of who they are. Legislation must be supported with further work around awareness and education to change hearts, minds and behaviour.

My work in BeLonG To Youth Services has taught me that life for young transgender and non-binary people in Ireland can be incredibly challenging. This is due to the lack of visibility, awareness or understanding about what it means to be transgender or non-binary.

We must ask ourselves this: do we want another generation of people in Ireland spending their 20s, 30s and beyond recovering from their early experiences of bullying, rejection and exclusion? That is, if they are resilient enough to make it to adulthood. Or do we want all our young people to thrive, to reach their full potential and to be part of a world where they are equal, safe and valued in the diversity of their identities and experiences?

We hope our work will help move Ireland along this journey and that very soon trans, non-binary and intersex people will all feel equal, respected and that they belong.

1 Man unidentified in psychiatric hospital for 30 years may have DNA taken
2 US election: Joe Biden and Donald Trump clash in chaotic presidential debate
3 US presidential debate: who won, was it any good, were there any surprises?
4 Google tells workers to return to country where they are employed
5 H is for hero: the origin story of Jack Reacher, a billion-dollar brand
Real news has value SUBSCRIBE