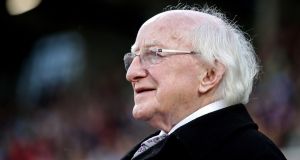 President Michael D Higgins said he had “heard and read with anxiety of the distress that is being experienced by some of those who are giving their all to serve the State”. Photograph: Laszlo Geczo/Inpho

President Michael D Higgins felt compelled last week to intervene in the dispute over pay at the Defence Forces. He insisted it “should not be too much to expect” that members are paid an income that is sufficient to provide for themselves and their families.

He had “heard and read with anxiety of the distress that is being experienced by some of those who are giving their all to serve the State”.

In response, some senior Government and opposition figures privately and publicly expressed the view that the President was intruding on matters beyond his remit.

Of far greater significance is that the President felt impelled to make his remarks in the first place. He is supreme commander of the Defence Forces with a moral responsibility to see to their welfare and, not least in a context of the ethics initiative in his first term, it is clear he is troubled by the manner with which Defence Forces’ concerns have been addressed by this Government.

They are bound hand and foot from fighting their corner.

Meanwhile, their full strength has fallen to its lowest level in more than 40 years. This is likely to get worse. Last July a report by the Public Service Pay Commission said 60 per cent of serving enlisted personnel and non-commissioned officers spoken to said they intended to leave within the next two years. Of the officers, 57 per cent in specialist positions said in a survey they planned to leave.

The commission’s remit did not allow it examine Defence Forces core pay.

Last July also the Government agreed to a 10 per cent increase in the military service allowance paid to virtually all in the Defence Forces and to reverse cuts of 10 per cent made to other payments in 2013.

At a cost of about €10 million, it has proved next to useless. Comdt Conor King, general secretary of the Representative Association of Commissioned Officers (Raco), pointed out how in real terms it meant “about 96 cent gross a day for a private soldier, about €1.30 for an officer and about €1.70 for a non-commissioned officer”.

He also noted that 1,200 Defence Forces personnel had left since Raco made its submission to the commission in February 2018. “We don’t want to strike, we don’t want to leave the State floundering. What we do want is recognition of our loyalty and not to be left in the poorhouse,” he said.

The €10 million cost of last July’s Government announcement amounts to almost a third of the €29.4 million underspend in the Department of Defence pay budget for 2018. So the money is there.

Currently Ireland is seeking support internationally for a seat on the United Nations Security Council. In July of last year, while in New York to launch Ireland’s campaign for that seat, Taoiseach and Minister for Defence Leo Varadkar took part in a ceremony to commemorate the 60th anniversary of Ireland’s participation in UN peacekeeping operations.

There too, he paid tribute to the 88 members of the Defence Forces who lost their lives while on UN service. What it made clear is that a strong element in Ireland’s case for that Security Council seat is the brave and frequently costly service of our Defence Forces on UN missions over those six decades.

It does seem hypocritical to use such loyal service in this way while at home 84 per cent of our Defence Forces are paid less than the average wage and are expected to work significant additional hours at night and weekends for €2 or €3 an hour before tax, with troops having to sleep in cars, offices or corridors because of lack of accommodation.

How can this be right?

A fundamental way out of this scandal would be the setting up of an independent statutory pay review body for Defence Forces personnel, such as operates successfully in other countries.