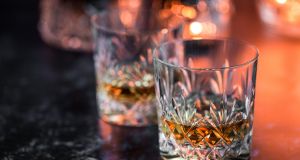 Northern Ireland also uses a similar standard measure of spirit alcohol as the Republic, 35ml, compared to the standard single shot of 25ml in England, Scotland and Wales.

The Northern Ireland-only backstop is on the agenda again after it was abandoned at the behest of the DUP, instead extended UK-wide, leading to the Brexit impasse.

The NI-only option is increasingly the solution to Britain’s crisis, best summed up as a mad effort to turn an emotional referendum result into a technical and diplomatic arrangement.

The House of Commons may find that the only way out is to vote for a Northern-only backstop, if not by October 31st then perhaps by the end of next January. It would prevent a hard border through regulatory alignment, kicking in if no trade deal was agreed between the UK and EU by December 2022.

The DUP and hardline Tories’ beef with the backstop is based on hysterical claims that if triggered, the North would be separated from the rest of the UK, effectively uniting Ireland under EU rules no longer applicable in Britain.

Their point of principle is rather bankrupt when it’s pointed out that the North already diverges from major laws enacted across the rest of the UK.

The examples most often cited are the North’s moribund bans on abortion and equal marriage, legalised in Britain in 1967 and 2014 respectively. However, the North practices regulatory divergence in many other areas and actively campaigns for more, even while it condemns the backstop’s alleged threat to pluck it cruelly from the bosom rules of the United Kingdom.

Some of them we can see with our own eyes on the roads and in the pubs. Northern Ireland has a different car registration system from the rest of the UK, based on the original 1904 number plate system of letters followed by numbers.

The code has been upgraded several times in Britain, as recently as 2001, but the North has not followed. The North has different bank holidays. By including St Patrick’s day and the Twelfth of July, it enjoys ten public holidays compared to the eight in England and Wales.

The North shares the same railway track gauge as the Republic for obvious reasons, which at 1600mm is wider than the British system of 1435mm. The North also uses a similar standard measure of spirit alcohol as the south, 35ml, compared to the standard single shot of 25ml in England, Scotland and Wales.

The British Gambling Act 2005 doesn’t apply in Northern Ireland. The cut to the top stake in fixed odds gambling terminals, announced in the UK’s 2019 Budget, didn’t apply in the North.

The Defamation Act 2013 isn’t applicable in Northern Ireland either. Nor is it covered by the Equality Act passed in the Houses of Parliament in 2010. This has left the North accused of having the poorest protections against racial discrimination in the UK.

The DUP’s other main objection to the backstop is that regulatory alignment would create a border down the Irish Sea. The Good Friday Agreement already created such a border in a number of areas in a spirit of North-South cooperation. For this reason, the promotion of tourism, trade and business development, as well as regulation of languages, lighthouses, waterways and food safety is done on an all-island basis, with a line firmly down the Irish Sea. In the case of Safefood, the staff responsible for the operation across Northern Ireland is based in Cork.

Even before the North-South implementation bodies were created in 1998, Northern Ireland diverged from the rest of Britain in its system of public service. Since partition, it exists as an entirely separate entity from the United Kingdom Civil Service. As a result, the North, with its population of 1.9 million, has 35,000 workers in the civil service, compared to Scotland’s 50,000 working for a population of 5.4 million. If you add in local government and quangos, a third of the entire Northern Ireland workforce is employed in public service.

It wants to abolish Air Passenger Duty in NI, even though it already charges different airport taxes on long haul flights into Belfast compared to the rest of the UK. And the DUP called for a Northern-only cut to VAT rates on hospitality after the Republic brought in a special nine per cent rate to boost tourism during austerity.

The backstop would not only protect the border and its daily use by people, goods and services, it would guarantee the all-island institutions set up under the Good Friday Agreement that have been lauded on both sides of the divide. The DUP’s show of fear and angst about regulatory divergence from Britain, and claims that backstop alignment might create a tacit united Ireland, are phoney.

The backstop, if ever needed, would merely continue a trend already celebrated by many in Northern Ireland, including the DUP.

Oliver Callan is a writer and satirist

1 Covid-19: Hairdressers, gyms and religious services could return next week
2 Bloomberg ranks New Zealand top in fight against Covid-19 - but how did Ireland fare?
3 How to gift your child a house deposit . . . tax free
4 Q&A: When will we know more about plans to exit Level 5?
5 The beginning of the end: 10 things to know about Covid-19 vaccines
Real news has value SUBSCRIBE