The Irish Times view on atrocities in Yemen: Saudis must be held accountable 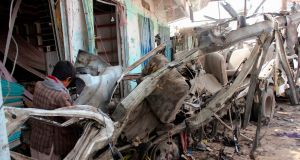 A Yemeni child stands next to the destroyed bus at the site of a Saudi-led coalition air strike, that targeted the Dahyan market the previous day in the Huthi rebels’ stronghold province of Saada last Friday. Photograph: Stringer/AFP/Getty Images

The latest atrocity in Yemen, which saw dozens of children killed in an air strike by Saudi-led coalition forces, once more directs international attention to the country’s terrible war and humanitarian catastrophe. The war between Houthi rebels in the north of the country, who receive Iranian support, and an exiled government backed by Saudi Arabia, is now in its fourth year. Thousands have been killed. Eight million of its 26 million population are threatened with famine as a result of the unscrupulous targeting of ports and organisations providing aid. It is high time for international action to encourage a political dialogue and relieve this human suffering.

The Houthi rebels are from a branch of Shia Islam quite distinct from Iran’s. They were in revolt without Iranian aid over inequitable treatment for more than a decade against the previous autocratic government, which was overthrown in 2011. The succeeding regime failed to resolve this and other conflicts. As a result the Houthi groups seized their chance to take over the capital Sana’a and the principal port.

The Saudi-led coalition’s efforts to displace them from these strategic centres have escalated the war over the last three years into a ruthless conflict in which markets, hospitals and weddings are targeted with little or no regard for established international rules of engagement. Cutting commercial routes and ties between different parts of this ancient and diverse country means the war has become an existential question of survival for much of its population.

This air assault on a children’s bus is linked to a further escalation of the war involving Houthi rebel missile attacks on Saudi industrial cities and oil infrastructures. The missiles are supplied by Iran in an effort to even the military stakes and counter Saudi involvement in the war. Many have been intercepted, but the cross-border attacks and further targeting of a Saudi oil tanker in the Red Sea have reinforced the determination of its young foreign minister and heir apparent Prince Mohamed to retaliate in this blatant fashion. Far from conforming to international and humanitarian laws, as claimed by a Saudi statement, this is a war crime for which they should be held accountable.

Recent diplomatic efforts by the United Nations to broker an end to the fighting around Hodeidah and other Red Sea ports have failed, making access for humanitarian aid even more difficult. International groups working to provide it have withdrawn or limited their work in such a dangerous setting. The failure to make progress on this question makes wider efforts to ease the conflict look more forlorn.

Demands for international humanitarian aid must be kept up on behalf of the ordinary Yemenis imperilled by the conflict.

1 Conor McGregor stops Donald Cerrone in 40 seconds on UFC return
2 Harry and Meghan will no longer be working members of British royal family
3 I rationed sex in my marriage for 20 years - but since menopause, my libido has rocketed
4 I’ve handed in my notice and I’m leaving Brexit Britain
5 Mary Lou has to call for the smelling salts as SF councillor deals a knock-out blow
Real news has value SUBSCRIBE