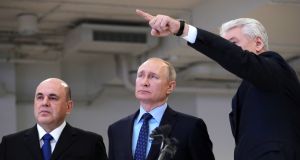 Russia is ramping up its response to the coronavirus crisis but the Kremlin has played down speculation that it will have to postpone a public vote on constitutional changes that would allow president Vladimir Putin to rule until 2036.

Concern over how the Covid-19 virus will affect the world’s biggest country is rising against the backdrop of what Kremlin critics are calling an “anti-constitutional coup” and a bid to make Mr Putin (67) president for life.

As Russia prepared to close its borders to almost all foreigners on Wednesday, its health officials ordered coronavirus tests to be carried out on all Russians who have returned from European states in the past fortnight, and on anyone with flu-like symptoms who has been abroad in the past month.

Russia has reported just 114 coronavirus cases and no deaths, figures that suggest a modest impact but which have raised concerns about the accuracy of public information and the amount of testing being done in a vast country of 140 million people, where medical care is patchy and trust in officials is low.

Taking a leaf out of China’s book, Moscow mayor Sergei Sobyanin announced that the capital was racing to build a new hospital for coronavirus patients in just one month, with up to 600 beds including 250 places for intensive care patients.

“Three days ago we started at the site, about 2,000 builders are working on-site, and simultaneously we are preparing the foundations, the structures themselves, buying medical equipment, finalising the plans and so on,” Mr Sobyanin told Mr Putin on Tuesday.

“I think the hospital will be built in a month, and it will serve not only during this period but remain for a long time,” he added.

Russian prime minister Mikhail Mishustin has announced the creation of an anti-crisis fund to help the country cope with the fallout from the spread of coronavirus and a plunge in world prices of oil, a key earner for the national economy.

The 300 billion rouble (€3.6billion) fund – full details of which are due to be released on Wednesday – is intended to soften the financial impact of Covid-19 on Russian citizens and companies, and to help pay for special measures to fight the outbreak.

Covid-19 is spreading as Russia prepares for a public vote slated for April 22nd on a raft of constitutional changes, which would let Mr Putin – Russia’s ruler for 20 years – run again in presidential elections in 2024 and 2030.

Kremlin spokesman Dmitry Peskov denied that Mr Putin was preparing to postpone the vote due to the coronavirus crisis, after Russia’s constitutional court deemed the reforms to be legal on Monday.

“We believe the threat of a deep constitutional crisis and an unlawful anti-constitutional coup . . . is hanging over our country,” a prominent Russian intellectuals said of the proposed changes in a petition that has been signed by more than 18,000 people.