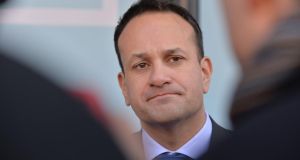 Taoiseach Leo Varadkar largely stayed above the fray this week, but that won’t last much longer. Photograph: Alan Betson

Simple to describe, complex to deliver. The parliamentary arithmetic is the same for everyone: you need a minimum of 80 seats to be elected taoiseach, and a few more to have a working majority that lasts. That is the unavoidable fact that now overhangs our politics and will determine what is possible, and what is not.

This is not, I grant you, the most incisive piece of political insight that you will ever read. But it seemed to have slipped the minds of some normally sane people this week, as well as many others, too, as they hyperventilated – some in fear, others in paroxysms of political ecstasy – about the prospect of a left-wing government led by Sinn Féin.

Micheál Martin’s refusal to do a U-turn on his aversion to Sinn Féin was predictable to students of the man and his organisation. Perhaps they are few in Sinn Féin, but I doubt it. Mary Lou McDonald’s public efforts to assemble a coalition of the left were largely performative, designed to bolster the idea that she won the election and any exclusion of her party from government is an establishment stitch-up. You’ll hear a lot more about that in the coming weeks, I promise you.

McDonald does indeed have a good claim to be in the mix for government, but hardly an exclusive one. Her party won just shy of one-quarter of the votes – meaning, as many people have pointed out, that three-quarters of people did not vote for her. If anyone “won” the election, Sinn Féin did, coming first in the popular vote. But that is not our criterion for leading a government, nor is it in most parliamentary democracies. If it was, Fianna Fáil would never have been out of power between 1932 and 2011.

The Sinn Féin claim for government rests more on the undeniable – if inchoate – “mood for change” that has been the main feature of this election, and in many cases the driving force behind the results. There’s no doubt that McDonald and her party embodied this mood more than anyone else – and she may well win the most votes for taoiseach when the Dáil meets next week. But governments are not put together on national moods; they are put together on parliamentary majorities. There is no “right” to be in government; get your 80 votes together and you’re in government. If you can’t, you’re not. Somebody else is.

The idea that Sinn Féin can “force” a second election to pick up the seats it left behind – and so procure the numbers to form a left-wing government – is similarly woolly. How would the party do this? The only person who can call an election is the Taoiseach. Leo Varadkar remains in office until someone gets 80 votes in the Dáil to replace him. It seems unlikely he would call an election in the near future so that Sinn Féin can boot him out of office. He cannot wait indefinitely, of course; but he can wait for a while yet. In 2016, the process took more than two months. The passage of time changes the political context. And that changes the politics.

Varadkar has largely stayed above the fray this week, but that won’t last much longer. Fianna Fáil will spend some time talking to the smaller parties – and their involvement will be essential – but the game is moving towards a possible Fianna Fáil-Fine Gael coalition.

Isn’t a coalition of the old firm, reorienting Irish politics on a left-right axis, what the left has always dreamed of?

Fianna Fáil will probably want to talk about a repeat and reverse of the confidence-and-supply agreement. This would take up some time, which is its real purpose, allowing the political context to change. But it is not going to happen. I am told with considerable vehemence that Fine Gael will not provide a confidence-and-supply agreement, despite suggestions from Varadkar before the election. The Taoiseach himself has told people this with some certainty, to the extent that they do not believe it to be a tactical feint. It is a proper U-turn, just like Micheál Martin’s position on Fine Gael.

Once the possibility of a Fianna Fáil-Fine Gael coalition– including the Greens and/or the Social Democrats, plus some Independents – solidifies, it will unleash a fury among their opponents in the Dáil and in protests outside Leinster House that will be white hot in their intensity. But we do live in a parliamentary democracy. If they keep their nerve in the Dáil, that phase will pass.

What some pragmatic people in both parties now expect is that a Fianna Fáil-Fine Gael-plus-plus administration would tack sharply towards the more left-wing policies that proved so alluring to many Sinn Féin and other left voters in the election. They would do what they have always done – accommodate themselves to the public mood. If the Greens are in, it would contain a radical climate action programme. If the Social Democrats are in, a real implementation of the Sláintecare health reform plan. A massive public housing programme is certain.

It was once said that when Charles Haughey embraced what used to be called fiscal rectitude in the late 1980s, the country had finally got what it always wanted – a Fianna Fáil government implementing Fine Gael policies. This isn’t quite what would happen in this case. But you would have a FF-FG-plus-plus government implementing at least some of Sinn Féin’s housing policies.

It would not be the change that Sinn Féin wanted – but isn’t a coalition of the old firm, reorienting Irish politics on a left-right axis, what the left has always dreamed of? In any event, you could hardly claim it wasn’t a change.

Sure, the parties who make up such a government could end up being punished at the subsequent election. Or they could run a government that tackles the problems that led to the demand for change, and not be punished. Frankly, there are no guarantees of anything in Irish politics any more.

1 ‘I woke up the next day in a guy’s house covered in bruises’
2 Coronavirus: What we know so far about how Ireland is affected
3 Coronavirus: Ireland plans for massive increase in tests
4 Woman (38) appears in court charged with murder of Garreth Kelly
5 What is coronavirus and what should I do if I have symptoms?
Real news has value SUBSCRIBE