Unless left unites, FG and FF will dominate politics and government forever 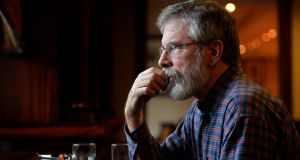 There are two big facts about the disposition of political forces in the post-austerity era: the enduring strength of the two big parties, and the fracturing of everything else.

Of course, the combined strength of Fianna Fá il and Fine Gael isn’t what it used to be (what is?): even just 10 years ago, in the general election of 2007, the big two corralled almost 70 per cent of the vote. The last Irish Times poll in May put them on a combined 57 per cent.

But given what Irish society and politics have been through in the intervening decade, you could argue that this shows a remarkable resilience – or perhaps a degree of tolerance among the electorate not exhibited by their counterparts elsewhere in Europe. However you choose to characterise it, the strength of Fine Gael and Fianna Fail remains one of the stand-out features of Irish politics.

A government without either looks impossible for the time being. That is not a conspiracy; it is because most people say they will vote for one of the two big parties.

The flip side to this is the fracturing of the alternative to the old Civil War duopoly. Sinn Féin’s rise has been steady rather than spectacular, but the party has essentially replaced Labour as the “half” in a new incarnation of the old 2½ party system.

Sinn Féin polls in the late teens and early 20s, though the party has a well-established pattern of underperforming poll numbers when it actually comes to the voting. Nonetheless it is by some distance the major force in the non-FG/FF part of the electoral landscape. The rest – the small parties of the radical left, the Social Democrats, the Labour Party, the Greens, Independents4Change and the other Independents, of governing and non-governing inclinations – are minnows, commanding no more than a few per cent and a few seats in the Dáil.

It’s not really possible to talk of the Independents as an homogenous political grouping – they include some of the most left-wing and some of the most right-wing people in Irish politics. Many of them are just opportunists. I don’t necessarily mean that in a negative sense – they are simply hoping to be in the right place at the right time when parliamentary arithmetic makes their votes valuable to the party trying to form a government. Office and/or influence affords them the opportunity to achieve local and national agendas.

That’s the model of Independent representation practised by TDs since Jackie Healy-Rae in 1997. It’s one of the particular features of the Irish system – an addendum to the dominance of the big two, not a challenge to it. They can’t really be described as a political alternative in any real sense of the word.

The former British chancellor of the exchequer, George Osborne, now enjoying himself tormenting Theresa May as editor of the London Evening Standard, used to say the first rule of politics is that you have to be able to count. Any consideration of the numbers suggests one irrefutable observation about Irish politics: without some sort of coming together of the disparate political forces of the left, there will be no serious challenge to the dominance of the Civil War parties.

There isn’t the remotest sign that such a development is on the cards and two events this week demonstrate that the political players don’t see it happening either.

It wasn’t just a sharp pitch for empty August news pages – it was an acknowledgment of the personal animus that underpins what passes for the Labour-Social Democrats relationship. They don’t like one another and in the places where the parties hope to pick up seats – like Limerick and Dublin Central and Dublin Mid-West – they will be each other’s direct rivals. That’s hard to get over. And if the two social democratic parties can’t manage some sort of an alliance, what hope is there for the more disparate parts of the political left?

Later in the week Sinn Féin frontbencher David Cullinane indicated that he favoured moving the party’s stance on coalition, opening the possibility that the party would join a Fine Gael or Fianna Fáil-led government as a minority partner. That his position was built behind a barricade of caveats – a truly republican programme for government, endorsed by the membership, and so on – doesn’t completely disguise what is going on here. Sinn Féin is starting a move on coalition.

Now, it’s far from a done deal – despite what outsiders think, the party is not a dictatorship (though nor is it a normal democracy) and Adams and Mary Lou will have to convince the membership before it happens. But the move is on, alright. It is a consequence of Sinn Féin’s reading of the state of politics, and it is hard to argue with it.

The irony of this acceptance of the enduring dominance of Fine Gael and Fianna Fáil is that a latent but powerful unhappiness with politics and politicians – legacy of an unforgiven and unforgotten economic crash – continues to bubble under the surface of public opinion.

The appetite is there for an alternative to the established politics. It’s just that nobody has figured out exactly how to meet it. And if they have, they’re not prepared to take the necessary risks to do it. It’s entirely possible that they never will.