Paschal Donohoe: Water debacle shows that the centre can hold 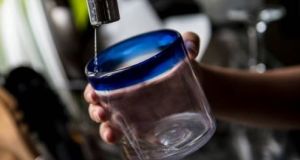 “The recent activity in the Dáil on water may not have been pretty, but it showed that the centre can hold and compromise can work. How often that feat can be repeated is open to question, however.” File photograph: Getty Images

“Everything changes and nothing remains still . . . you cannot step twice into the same stream.” So wrote the philosopher Heraclitus nearly 2,500 years ago when he argued that ever-present change is the very essence and nature of the universe.

As it is with rivers, so too it is with life. This doctrine of universal flux was evident when we witnessed the UK vote to leave the European Union and the election of Donald Trump as president of the United States.

Beyond politics, we face seismic upheaval and change. Free trade and the interdependence between nations face challenges that have the potential to alter the world economy. Mass movements of migrants, resisted by many in the developed world, have caused division and, alas, intolerance.

Workplaces of all sizes face transformation as artificial intelligence and robotics continue to develop. Advanced 3D printing could upend how we understand manufacturing, while driverless cars will change how we conceive transport.

This level of intense change is moving us into an era of profound unpredictability. Orders are challenged, norms are shaken.

These risks are increasingly acknowledged. Richard Haass, the former adviser to Colin Powell and United States special envoy to Northern Ireland, writes in his new book that “these are no ordinary times. It will not be business as usual in a world of disarray.”

He concludes that “the 21st century will prove extremely difficult to manage, representing as it does a departure from almost four centuries of history, what is normally thought of as the modern era, that came before it”.

This really matters to Ireland. After all, Ireland is a trading nation deeply embedded in the very political and economic order that is under pressure. This is a globalised country; in fact, it is the second most globalised country in the world, according to the KOF Globalisation Index.

We are also a country of migration: the Irish diaspora runs to tens of millions and the latest census shows that 17 per cent of those who live in Ireland were not born here.

To put it simply, at a time of unpredictability, offering assurance can win big.

Ireland integrated with the global and European economy at a time of unprecedented stability. That is now changing.

So what is our response? Indifference or resigned stoicism are not options. Neither is hope without recognition of changing circumstances. There is another way that sees Ireland use our strengths and experience to chart a different course. To put it simply, at a time of unpredictability, offering assurance can win big.

Our corporation tax policy, overseen by Minister for Finance Michael Noonan, is a case in point. What we have learned is that predictability of the rate and the certainty that it will not change are as important as the 12.5 per cent rate itself, because it allows businesses to plan, invest and grow. Changes do not come as a surprise.

This approach can be applied elsewhere. Certainty matters in a new way. At a time of volatility, offering predictability and order to citizens, employers and investors is incredibly valuable.

We can develop this approach across a small selection of other policy areas. The management of information and capital and the treatment of citizens and their rights are changing in many previously settled countries. Certainty for Ireland in such areas offers big benefits.

The process for setting public pay will be the most important example of this in 2017. Employees in the public service need to know where they stand with their wages now and in the future. Crucially this then gives the Government the required order to plan both public service improvements and pay changes.

Order with more than one third of Government expenditure can then help set the right tone for decisions across our economy.

This can create an intangible infrastructure which could be every bit as valuable as our roads and ports.

That is why it is more important than ever that the centre of Irish politics holds, a “holding centre” that offers voters choices without creating the anxiety and uncertainty that have been experienced elsewhere in recent months.

The recent activity in the Dáil on water may not have been pretty, but it showed that the centre can hold and compromise can work. How often that feat can be repeated is open to question, however. This approach may have worked for water, which is a relatively small amount of exchequer funding. It is unlikely to work for bigger challenges such as public pay policy or investing in new infrastructure.

As Britain goes its own way, we must be ready for the challenges we face and be a point of certainty with volatility enveloping others

Historically, Ireland has been good at demonstrating that while governments changed and policies changed with them, the fluctuations in those policies were within a certain range.

Ironically, the United Kingdom was good at this too. As Britain goes its own way, we must be ready for the challenges we face and be a point of certainty with volatility enveloping others.

Heraclitus died, it is said, when he was devoured by dogs. It does not have to be that way. As we face the future, we can stand ready by remaining steady.

Paschal Donohoe is the Minister for Public Expenditure and Reform