Overeducation claims are one more attack on young people 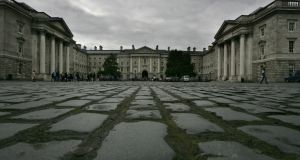 ‘Young people are told they are overqualified. This could be a prelude to further underfunding of universities if colleges are forced to reduce their Irish intake and service more paying students from abroad.’ Photograph: Frank Miller

The recent headline “Irish workers are the most overqualified in Europe” should be treated with caution. If not, the Economic and Social Research Institution (ESRI) study to which it refers could become inadvertently the basis for another attack on the quality of life of young people.

Ireland has an unusually large youth population, by European standards. Already, young people here and abroad struggle to find the sort of long-term, adequately paid jobs that allowed their parents in many cases to enjoy a stable lifestyle. On top of that, bad planning has seen Ireland emerge from a financial crisis with a housing policy stacked against young people buying their own homes, or even renting them at reasonable rates in some areas.

Now young people are told that they are overqualified. This could be a prelude to further underfunding of universities if colleges are forced to reduce their Irish intake and instead to service more paying students from abroad.

So whose fault is it if young Irish people are somehow “the most overqualified in Europe”? Why it’s the parents’ fault of course, and not that of successive governments in charge of education.

“Irish parents blamed for high rate of overqualified workers,” blared one headline. The general secretary of Education and Training Boards Ireland reportedly claimed there is “misplaced snobbery” among many parents who are allegedly “obsessed” with sending their children to higher education.

When did parents who want the best for their children come to be seen as “obsessed”? And when did the best education cease to be a college degree? Recruiters value college degrees, and some use them as a first-round qualifier for job interviews.

Will parents with money stop sending their children to college if the government cuts back on the number of “free” places on offer to others? You bet they won’t.

Not that “free” places are all that free. Costs include registration fees, books and accommodation. Parents are not making sacrifices to raise the necessary funds because they are snobs. They are doing so because they recognise the cultural and economic value of higher education.

The attrition rate on some college courses, described as an indicator that many students should not be at third level in the first place, can have more immediate causes. Some students leave purely for financial reasons. Some go because oversized classes due to inadequate State spending leave little time to address students’ individual needs.

Referring to the ESRI study, UCD’s Prof Tony Fahey sounded a note of caution and described the position as “complicated”. It surely is.

For one thing there is a growing international crisis of unemployment and under-employment, due to rapidly increasing automation. The once futuristic world of people displaced by machines is already partly upon us, and we must decide now what that means. How to fill our time? Education helps to answer the question, especially when geared to the needs of the whole human being and of society and not just to short-term – if important – industrial demands.

The biggest current issues in Irish education are underfunding and social bias. Any profile of graduates, especially in the professions, shows our failure to ensure that poorer children get ahead on an equal footing.

This is not to deny that training could be better matched to people’s needs. But it must be done in a way that protects young people. Will governments ensure that apprentices under any new scheme are paid properly, and not exploited as “interns”? Will selection be fair, and not favour family members? Who will supervise the standard of training? Will there be jobs at the end?

There is scope for other reforms too. For example, university practices that have privileged certain kinds of industrial research and funded or rewarded it in disproportionate and distorting ways need to be checked transparently. The school and college years could be a bit longer. The issue of languages at secondary level, with French so dominant, is another problem. It is not enough for governments to have the will to reform; they must find a way to make reform happen – but not at a cost to young people.

One observer last week reportedly said: “We see it every day . . . bartenders who have university degrees.” Well, some of my best friends may be bartenders but I know few of them, let alone other parents, whose highest aspiration for their children is to tend bar. If that’s snobbery, call me a snob.

Colum Kenny is emeritus professor of journalism at DCU

4 Letter from Saudi Arabia: ‘The Irish here are all in the same boat’