We live in a bifurcated reality, with inconsistent ways of looking at what a house is 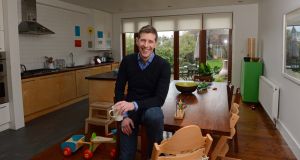 There is: Room to Improve, The Great House Revival, Home of the Year, and now Dermot Bannon’s Incredible Houses. At the same time on the same channels, the same organisations report on our crisis in housing. Photograph: Eric Luke

We are living in an extreme state of cognitive dissonance in Ireland of late.

The dissonance - a tension between two contradictory ideas - is apparent in many ways but is perhaps most glaringly obvious through our media.

This type of headline appears incessantly on all major news sites in Ireland every single day: The Irish Times, Irish Independent and Journal.ie.

Meanwhile, on RTÉ television, there is an endless stream of programmes that portray houses as idolatrous shrines of wealth and status, fetishised objects of luxury.

Middle-aged men, sweatshirt casually thrown over their shoulders, wander around large fancy houses commenting on “space” and “light” as if these were two esoteric concepts foreign to all but the most aesthetically minded.

There is the view  of a house as a source of wealth, a commodity, a product to be bought, developed, adorned, and sold

There is: Room to Improve, The Great House Revival, Home of the Year, and now Dermot Bannon’s Incredible Houses.

At the same time, on the same pages, on the same channels, the same organisations report on our crisis in housing: record-breaking homelessness figures, unaffordable rents, families living in hotels, vulture funds sitting on vacant properties, young working people forced to live at home, protests and occupations on the streets.

We live in a bifurcated reality, with two mutually inconsistent ways of looking at what a house is.

On the one hand, we have those (read: the vast majority of people in Ireland) who view a house as a home. It’s a place to shelter you and your family from the cold and the rain, a place to lay your head down at night to rest, a place to cook food, to grow up, to raise a family, and be with friends.

It’s the site where we live out our daily lives, the place to which we return after going out to work or travel. It provides a sense of being rooted in the world. Its where we dwell, in the words of Martin Heidegger, where dwelling is not merely to be inside a physical space but is to exist in a series of intimate relationships to space and to people.

On the other hand, there is the view – as expressed by the headlines and programmes above – of a house as a source of wealth, a commodity, a product to be bought, developed, adorned, and sold.

How do we have hundreds of vacant buildings in a city with a shortage of homes. How can something so seemingly ridiculous happen?

It’s something to speculate on to create value, wealth, and status.

This is the house in the eyes of the developer, the banker, and the real estate agent. For them, a house is, by definition, a thing with a potential exchange-value, symbolising what price it can fetch on the market.

This distinction is not new, nor is it limited to housing. All products in capitalist societies, and sadly, maybe even all things, have both a use-value (does it satisfy a human need?) And an exchange-value (how much can I get for it?)

Those who believe in market-based economics think the best way to satisfy our needs is to unleash the hunger of entrepreneurs to maximise exchange-values. Clearing the way for developers to generate private wealth will just so happen to result in the satisfaction of our needs, so the thinking goes.

Sometimes this works, and we get cheap clothes or food, but rarely without human or environmental suffering elsewhere.

But sometimes it doesn’t work. And when it doesn’t work for certain human needs – like housing, healthcare, or education – the impact is cruel, devastating, and long-lasting.

It also results in incomprehensible absurdities, like how we have hundreds of vacant buildings in a city with a shortage of homes. How can something so seemingly ridiculous happen?

It happens because our Government is committed to the idea that the best way to meet human needs is through the market, even for something as essential as a home.

And right now, as stated by economist PJ Drudy in this paper, the logic of the market is telling developers to sit back and let prices keep rising. Rather than build affordable homes, they drip feed “small numbers of expensive homes onto the market to maintain prices”.

So while we continue to scream “Just build social housing like governments have done here and across the world many times in the past”, they don’t hear it as an option.

And they will continue not to hear and we will continue in this cycle of crises, unless they change how they view what a home is and realise that certain human needs should not be left to the whims of people seeking profit.

Dr Robert Grant is a Dublin-based writer, member of Philosophy Ireland, and tutor of philosophy at Trinity College Dublin. He tweets at @RobGrant77