An Irishman’s Diary: In two areas, at least, age has improved me 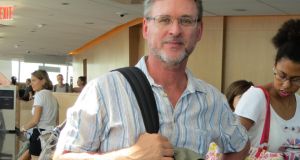 Happily, I still have a full head of hair, greying ever so gradually.

As a friend described it, I celebrated a “roundie” birthday earlier this year.

If you’re looking for a chronological marker, the state of Alaska joined the Union one day before I did in January 1959.

If you’re still curious, it’s no contest which of us has made the most of our natural attributes. Since 1982, the Alaska Permanent Fund has doled out on average a $1,200 oil-generated dividend each year to state residents, regardless of age. Over the same period my earnings – as a writer and otherwise – have been more erratic. In fact, after mentioning the Alaska payout to my wife, I caught her filling out an application in my name for a job with Domino’s Pizza — in Anchorage.

Seriously, though: despite my fluctuating income over the years, I’ve come to realise, quite by accident, that there are reasons to rejoice as I reach three score years.

This late life epiphany is all down to my wife. In the final weeks of last year, she pulled several boxes of old photos out of a backroom closet, searching for some suitable images to include in a 2019 family calendar.

As you’d expect, I featured in a few of the historic snaps that surfaced.

Now, browsing through old photos can be a depressing activity. The shimmering vitality and hopeful potential of our former selves sometimes shines an unfavourable light on the present-day model. Or, just as unsettling, across multiple photos you might see yourself playing a central role in a boisterous celebration from your past that you have no memory of.

In my case, however, I was pleasantly surprised to discover that in two areas at least age has improved me.

Growing up in suburban Boston, I was never a serious follower of fashion, in behaviour or appearance.

This quirk was duly noted in the 3,800-student maelstrom that was Medford High School and before that during my time at Lincoln Junior High, which in my day might have been aptly named “The Tony Soprano Training Academy”. While attending both institutions, I sported a hairstyle and eyewear that a vaudevillian comic would have rejected as too ridiculous.

In fact, my friend Dan Creedon and I regularly recall the time when as Medford High freshmen we were exiting the school library and from across the corridor a slouching senior addressed me with the immortal line: “Hey frizz, got a dime?”

When your hair sets you apart from your peers – this was in the mid-1970s, remember – you know something needs to change.

Likewise, starting in the seventh grade at the Lincoln, I routinely chose eyewear that was distinctive.

Large, dark, heavy frames pulled from the discount shelf, with extremely thick lenses at the edges that I was assured would improve my peripheral vision. (Better to watch my back at the Lincoln, I suppose.) My outlandish hair – which defied natural law by growing in a horizontal fashion rather than in a downward direction – completed the effect.

Unfortunately, this pattern continued up to and including my wedding day in August 1992.

By then, I had added a full beard to my facial ensemble. In the official photos taken on the grounds of the Blarney Park Hotel, I don’t quite look like a near-sighted hobo who has attached himself to the wedding party, but it’s close enough. My wife to her credit remains timeless in our marriage portraits, classy and elegant, much like my mother and father, who appear as dashing and stylish by today’s standards as they did on the occasion of their April 1956 nuptials at St Peter’s Church in Cambridge, Massachusetts.

Happily, I still have a full head of hair, greying ever so gradually. Most of the time it is maintained in a modest and dignified manner. (Full disclosure: I do go shaggy on occasion, a kind of boastful display aimed at the startling number of young guys who are prematurely bald these days – which perhaps explains their fondness for luxuriant facial hair.)

My eyeglasses are also more in keeping with current styles. The lenses are light-weight and more discreet than in my youth. Plus, the frames are understated and come endorsed by a reputable designer.

Just as importantly, I’m not at risk of being an embarrassment to my 20-year-old son, as my earlier self might have been.

In fact, on a very good day, you might even say I’m trendy.