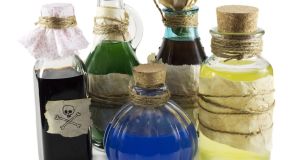 The “cure” involved a rubber ball, filled with carbolic acid, the fumes of which users inhaled to flush any badness out of their systems. Photograph: iStock

When advertisers make grandiose claims for a product, suggesting it will increase your longevity or make you sexually irresistible, or whatever, they are engaging in what is sometimes called “eulogistic commendation of the res vendita”. But since only lawyers call it that, a promoter who hears this exotic phrase for the first time may already have overstretched his case and be appearing in court.

One such cautionary tale from British legal history is Carlill v the Carbolic Smokeball Company, from 1892. The company had marketed what it claimed was a cure for various respiratory illnesses of the kind now again making global news. It involved a rubber ball, filled with carbolic acid, the fumes of which users inhaled to flush any badness out of their systems. And when the first advertisements appeared – as for example in The Irish Times of February 1888 – they suggested only that, having been tested in America for several years, this was “an invention tried and not found wanting”. By 1891, however, the company was emboldened to claim that the smokeball “will positively cure” a range of listed illnesses. Such was the vendors’ confidence that, in dramatic notices posted in some British newspapers, they now also offered a “£100 reward” (about €12,000 in today’s values) for anyone who used it as prescribed and still caught the flu.

Respiratory illness was big business in 1891. Just like today, the world then was battling a global pandemic, “Russian Flu”, the first wave of which had peaked in early 1890 but which would recur for several years to come. Early cases had been in St Petersburg, hence the name. The virus had since spread quickly and widely, however, precipitated by the transport revolution of that era, railways.

Meanwhile, back in Britain, a woman named Louisa Carlill used the carbolic smokeball and nevertheless – surprise, surprise – caught the flu. She duly applied for the reward and the case went to court, where the defence lawyer was one HH Asquith, future British prime minister. His task was to argue that claims for the product, reward and all, had been nothing more that the ancient art of puffery. But as confirmed by the Court of Appeal, the company was found to have entered a binding contract. Mrs Carlill won her £100.

The owner of the smokeball patent, one Frederick Roe, had unlimited liability and so might have been ruined by the case. He wasn’t. Only three people successfully claimed. And Roe must have had unlimited neck as well, because after relaunching the product, with now-limited liability and other strings attached, he used the low number of claims as evidence of the smokeball’s effectiveness, while doubling the reward.

The moral of the cautionary tale is therefore confusing. The company did go out of business a few years later, but only after Roe had left the management and it had softened the hard sell. One legal historian has suggested its ultimate mistake was failing to appreciate the importance of aggressive advertising in the field of “quack medicine”.

Russian Flu had played itself out by then, after killing a million people, including at least one Russian celebrity of the period. Madame Blavatsky, occultist, founder of the Theosophical Society, and friend of WB Yeats, succumbed in 1891. Mrs Carvill, by contrast, survived, and although she died from flu eventually, it was half a century later, when she was 96.

But the effects of the 1890 pandemic may have lingered longer than the virus itself. A generation later, when Spanish Flu wreaked havoc on the world, it was noted that people in their late 20s – including many soldiers who had outlived the Great War – were disproportionately affected.

One possible explanation is summed up in another high-flown phrase, this time scientific rather than legal: “original antigenic sin”. It suggests that a person’s first exposure to a certain kind of virus dictates the body’s response to later, similar viruses, in ways that can be fatally limiting. Thus it could be that those who caught the Russian Flu as babies, and survived, were more vulnerable to the strain that broke out 30 years later.

Crown Prince Erik of Sweden may have been one such victim. Born in April 1889 and never robust, he died in the 1918 wave. Also claimed by that pandemic, but indirectly, was another friend of Yeats, the “Irish Airman” Robert Gregory. In his case, it was a reaction to inoculation that proved fatal. Inoculation would not have prevented flu anyway, no more than the smokeball.  That had been consigned to the dustbin of history by then, although its lessons are still taught in law schools.

1 Man unidentified in psychiatric hospital for 30 years may have DNA taken
2 H is for hero: the origin story of Jack Reacher, a billion-dollar brand
3 Google tells workers to return to country where they are employed
4 Miriam Lord: Another dog’s dinner as D’Arcy jumps on the gravy train
5 Graham Norton: ‘I wanted out, out, out of Ireland’
Real news has value SUBSCRIBE