How Joyce paid the ferryman 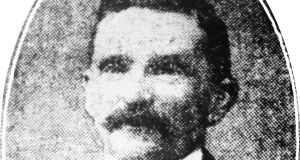 Patrick Dignam: a real-life Dubliner, he was killed in the crossfire of Easter Week

Of the many shopkeepers mentioned in James Joyce’s Ulysses, apparently, there is only one you will not find in Thom’s Dublin Directory for 1905, the year after the book’s events.

His name is Moses Dlugacz and, like all the other business owners, he too was a real person, but in Trieste, where the author knew him. He never set foot in Dublin. Joyce just imported him in spirit and, for the purposes of the book, gave him a butcher’s shop in Dorset Street.

This allows Dlugacz to play a small but vital role on June 16th, 1904, selling a pork kidney to Leopold Bloom, who lives around the corner, relishes eating “the inner organs of beasts and fowls”, and will cook it for breakfast. If not by name, the adopted Dubliner from Trieste is thereby commemorated every Bloomsday in re-enactments of the meal, the Joycean version of Holy Communion.

But nothing is simple in Ulysses, where banal events often have deeper meanings – many, like the title, referencing Greek mythology. And as journalist and scholar Senan Molony will argue at a talk in Dublin next week, Joyce probably brought Dlugacz to Dorset Street for another, more important job: to play the part of Charon, mythical ferryman of the underworld, who carries the souls of the newly dead across the river Styx to Hades.

His vocation aside, there are hints of this in the butcher’s physical appearance, suggests Molony. The Roman poet Virgil tells us that Charon had fierce eyes, “like hollow furnaces on fire”. And sure enough, as Bloom pays for his kidney, “a speck of eager fire from foxeyes thanked him”.

Then there is the transaction itself. Charon was always paid a coin for the river crossing, typically placed in the mouth of the deceased. Bloom, by contrast, has to pay three coins for the kidney, all pennies. But this is not just the result of inflation.

Moloney notes that it allows Joyce to engage in a passage of word repetition as, first, the coins are “read quickly and quickly slid, disc by disc, into the till”. Then, the butcher says: “Thank you sir. Another time.” Bloom, who was thinking of saying something else but decides against, mentally echoes: “another time”. Then he bids the butcher “Good morning” and as he leaves hears a “Good morning, sir” in return.

How significant is this verbal doubling down? Well, we know that Bloom will later attend the funeral of Paddy Dignam (who, despite being fictional, is still buried every June 16th in Glasnevin and, as of last July, now even has an annual “month’s mind”, in a nearby pub).

The repetition could be just a reflection of Bloom’s own demise to come (“another time”). On the other hand, it is it well established by now that, while recreating the Dublin of 1904 in faithful detail, Joyce also used Ulysses to foreshadow events that would befall his city during the years he was writing his epic (1914 – 21): the Easter Rising in particular.

He followed that from exile, via newspaper clippings, with horror and pity. And in 1918, when the Journal of Geneva asked him to write about the sufferings at home, he disqualified himself from such “personal pronouncement”. The most he would do, henceforward, was to comment “by means of the scenes – and characters – of my poor art”.

It is in this context that Molony introduces us to another Patrick Dignam, a real-life Dubliner, who was killed in the crossfire of Easter Week, and whose name now features on the wall of victims in Glasnevin. He was the same age as the fictional Dignam and would have been a close neighbour of the fictional Bloom, having lived in St Joseph’s Place, barely 100 metres away, past which Bloom walks to the butcher’s.

The real Dignam had worked as a driver for Downes Bakery, which might explain multiple references in this and other passages to bread and bread vans. It may also be why, in the carriage carrying Bloom and others to the fictional Dignam’s funeral, the men find their seats littered with “crumbs”.

For the many other clues that the author knew exactly what he was doing here, you’ll have to attend the actual talk, which is in the James Joyce Centre, at 6.30pm next Wednesday.

In the meantime, getting back to the real-life Moses Dlugacz and why Joyce’s smuggled him into the Dublin of Ulysses, there is one other, compelling detail that would have recommended him for the role of coin-taking ferryman.  It is, as Molony says, “the clincher”.

Back in Trieste, Dlugacz had worked for the Cunard Line cruise company, in the position of “chief cashier”.

1 What is Houseparty, the app everyone’s talking about – and not in a good way?
2 Tuberculosis vaccine ‘potential game-changer’ in Covid-19 fight
3 Irish woman in Sweden: No lockdown, little distancing, people still shaking hands
4 Remote control: Coronavirus is changing how Ireland is governed
5 Mary Lou McDonald: This crisis shows that Sinn Féin was right
Real news has value SUBSCRIBE