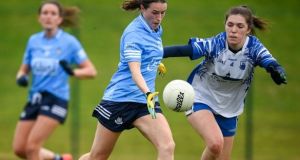 Sinead Aherne of Dublin in action against Róisín Dunphy of Waterford during the All-Ireland Senior Ladies Football Championship Round 2 match between Dublin and Waterford. Photograph: Stephen McCarthy/Sportsfile

Many are filled with gratitude and fondness for the GAA. This is particularly true after the hype surrounding the All-Ireland finals.

As well as the sport itself, its voluntary efforts to facilitate children and young people having meaningful pastimes during restrictions is second to none.

And on a subject close to my heart, the GAA I am told is an important support for girls interested in sport. I am happy to accept all of these assertions are true.

However it is also true that the GAA also makes women marginal, privileges men, and supports and justifies sexism. And there is a name for that – it is called misogyny.

Misogyny has a number of key features. Making women peripheral is key. And sadly sometimes it is the system that is misogynistic. And it is the GAA system with its structures based on a historical understanding of social and sporting order that works to disadvantage women or girls and even to make them feel inferior.

It actively undermines women’s and girls’ participation in Gaelic games. We have heard stories for many weeks of young women not given comparable access to sport facilities despite being deeply committed to their sport. Women ushered out of changing rooms to ensure access for male players, girls asked to play elsewhere so that real business of male training or matches can proceed.

Large volumes of academic research have demonstrated that this subtle and not so subtle undermining of women’s involvement in sport has been a key barrier to their continuing participation in team sports. And by doing so, the GAA is acting counter to its own mission to support participation in Gaelic games.

I would imagine the GAA has access to this information, yet it chooses not to work to its own mission. Why could this be?

There are two possible explanations. One is that this is a sin of omission. Misogyny routinely ignores issues that affect women. We have seen this in microcosm over the last weeks. There has been hand-wringing about about all of the carry on over the women’s football final. But that is now old news. It has been supplanted by the triumphant end-of-season entertainment afforded by the men’s hurling and the football finals. The GAA it seems is back to business as usual. And it just happens to be decidedly male.

A second possibility is that ignoring girls and women in favour of the men’s game is a sin of commission. Well, misogyny has many faces. It also manifests as male privilege. Online GAA supporters have articulated the terrible pity that the women’s game cannot secure more income. This logic ignores the position of historical privilege from which those organising the men’s games operates. It has all the cards. The big stadia, their associated ticket income, the ability to offer television rights in Ireland and beyond. Indeed, questions have to be asked about why the GAA, whose vision is to offer everybody the opportunity to participate in Gaelic games and culture, has privileged men’s use of these resources for nigh on 40 years.

Not only has the GAA ignored these issues, it absolves itself of responsibility for the de facto poor treatment of female players. As the new year comes round and we all have time to reflect, perhaps the GAA might want to think, not only of its own mission and vision but also about its sponsors. There are very many sponsors that will shy away from being associated with an organisation that fails to support women in the same way as men, girls in the same ways as boys.

Sport is the last bastion of gender segregation globally. Wide-ranging research shows that segregation associated with single sex sporting environments limits young men’s social contacts and fosters reproduction of very problematic social behaviour. We have seen this phenomenon in action over the years across many sports, with elite sportsmen being given too wide a berth by far too many supporters in occupational, educational and even legal settings. Because of course misogyny has another very unattractive face – a hostile aggressive one, which makes it very difficult for us all to speak out against these issues.This also makes being critical of the GAA and its practices a dangerous sport.

The Catholic Church, Fianna Fáil and the GAA were once described as the three pillars of the Irish state. Organisations that wove together the fabric of Irish society together. The power of the former two have been eroded. And their failure to engage and empower women is at the heart of their demise. This is the GAA’s moment. To survive it will have to live up to its own mission to support Gaelic games culture and life long participation for all, and not just for men and boys.