Cliff Taylor: I am afraid this Brexit business is going to hurt

Consumers will quickly feel the impact of Brexit, deal or no deal 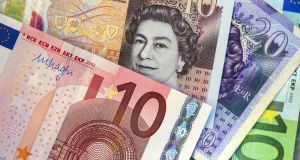 If sterling falls as a result of a no-deal – and stays lower – then this could limit some of the impact on prices, though it would make life even more difficult for Irish exporters to the UK

A lot of the Brexit debate is dominated by the impact on businesses, particularly the food sector which is exposed if there is no trade deal between the EU and UK. But consumers are on the front line too, facing higher prices whatever way the talks go, new complications in online shopping and the prospect of some delays in the delivery of goods and, in the longer term, changes in what is available on our supermarket shelves.

The interest of businesses and producers tend to grab the headlines because in some cases the consequences for them are extreme. And there will be real problems in a no-deal scenario, particularly for meat exporters, many of which would be priced out of the UK market by tariffs, with serious knock-on implications for farm incomes. The Government is even now mulling precisely what supports to make available to help the sector and try and protect jobs and incomes.

The hit to consumers will be more diffuse, but it will noticeable and – because it affects so many people – significant. When one of your main trading partners, and a key source of grocery imports in particular, leaves your trading zone, then consumers are going to notice. The extra customs procedures and delays we have been hearing about, which will apply even if there is a deal, will inevitably translate into higher prices and – initially anyway – are likely to create some supply interruptions for consumers. If there is no trade deal, then import duties or tariffs will add further to pressure on prices for consumers, with food again in the firing line.

It is impossible to be exact on what this could mean as we wheel our trolleys around , but an ESRI research paper by economists Martina Lawless and Edgar Morgenroth – Brexit and Irish Consumers – set out to give decent ballpark estimates. It looked at imports to Ireland from the UK and estimated what might happen to prices in the shops. An important caveat is that it is impossible to estimate exactly what additional costs businesses will pass on to consumers and also to what extent shoppers might switch to products made in Ireland or elsewhere in the EU and thus avoid higher prices on UK goods.

A key finding is that most of the additional cost to consumers comes from the new customs procedures, bureaucracy and delays which the UK’s departure from the EU single market and customs union will bring. We are now facing these costs whether or not a trade deal is done between the two sides. This could add up to €900 a year to the cost of the average shopping basket, according to the estimates in the paper.When you add tariffs which would apply if there is a no deal, the potential increase rises to about €1,350, an increase of about 3 per cent in the overall price level.

Most of the damage would be done by higher grocery prices – as we import a lot of these from the UK, the food products may face particular delays and disruption as they can’t be stockpiled and, of course, the heaviest tariffs by far apply in this area. Among the products which could see big price rises are cereals, bread, meat, cheese, coffee and tea and many types of confectionery. Non-food products most affected would include a whole range of household goods as well as clothing, shoes and furniture.

In terms of consumer prices, Brexit is a big deal whatever happens – and a no-trade-deal Brexit increases the pain. A clear result from the analysis is that less well-off households take the biggest proportionate hit, because they spend more of their income on products such as groceries which would be most affected. So while they may lose less in cash terms than a better-off household, the hit to them is bigger as the increase consumes more of their income, in excess of 4 per cent in some cases.

With or without a trade deal, Brexit will effect thousands of decisions made by consumers and businesses every day

If sterling falls as a result of a no-deal – and stays lower – then this could limit some of the impact on prices, though it would make life even more difficult for Irish exporters to the UK. That said, currency forecasting is a mug’s game and while sterling is now swinging with every new signal from the talks, the trend over the coming months is what is important.

Of course, when the initial economic disruption is passed, our economic behaviour will change. If a UK cereal is, say 15-20 per cent more expensive, we might look to substitute an Irish one. Supply chains will alter and fewer UK products may be on the shelves in some areas.

And here there is a wider message. Brexit will reduce the economic links between Ireland and the UK. To an extent this was underway anyway – our exporters have diversified in the years since we joined the EU. But in some sectors the UK remains vital.

The dairy industry has developed new products such as infant formulas for sale around the world, but we still rely on the UK to sell traditional products like cheddar. The beef sector relies on the UK for not far off half its exports. And the sectors which rely on the UK tend to employ a lot of people and have big links with the domestic economy – think beef and dairy farmers, for example.

With or without a trade deal, Brexit will effect thousands of decisions made by consumers and businesses every day. In many cases this will reduce trade with the UK, because things have now changed and incentives are different. As our nearest neighbour, we will continue to buy and sell with Britain. Economic theory teaches that proximity is vital. But Brexit will still drive a wedge between the two economies and interrupt many of the close relationships built up over many years.

2 Mary McAleese: My ‘heart went out’ to Mary Robinson – and to Princess Latifa