Opinion: Civil servants must be able to speak out and question public policy 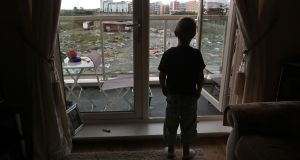 A child at his apartment window, in the unfinished estate of Belmayne, Dublin in 2011. Photo FRAN VEALE

Earlier this year, myself and another colleague from the planning department of Dublin City Council were called in by the management and told that the Department of Environment, Community and Local Government had rung complaining about our comments as professional planners in this paper.

We had criticised the major reduction in apartment quality standards by the department. It was clear the department wanted us to be silenced or there might be adverse consequences. It was quite an amicable meeting with the council and they seemed embarrassed having to relay the department’s message.

I had decided to go on the public record about this decimation of quality housing principles to prevent a reduction in future living standards and to draw attention to the hurried way in which it was being done. Initially I declined to go on the record for all the reasons one can imagine, including fear of challenging an influential government department and potential repercussions.

I began to think about it more, and I came to the conclusion that the call was an attempt to intimidate, to silence questioning, dissent and difference of opinion and that this was unacceptable in a democratic republic. Planning has been an area long derided as a source of unacceptable practices and this seemed to me to be yet another example of the same mindset.

On critical planning and other issues, especially on the housing standards central to people’s quality of life, there has to be public consultation so we can get public policies that suit the people, not just sections of the industry.

Apartment standards may seem like an arcane matter but they have a huge daily impact on people’s quality of life. Access to affordable, quality housing is a matter of human rights and equality.

Bedsits or studios of 40sq m must now be allowed. The previous minimum apartment size in Dublin, Cork and elsewhere was 55sq m. This significant reduction in apartment quality will affect the most vulnerable, particularly the elderly.

Alone, the voluntary organisation that represents older people, said: “We would be concerned that it will be our older persons who end up living in these tiny studio apartments . . . Studies have shown us that older persons spend more time in their home than any other demographic; the average 80 year old will spend 80 per cent of their day at home. They need a space that they can live in – not somewhere to just exist.”

The final very unusual feature of this reduction in apartment standards is that the department, in the Planning and Development (Amendment) Act 2015 which was guillotined through parliament, gave itself extraordinary new powers to override the views of local elected representatives and residents and instruct planning authorities to abide by the department wishes and reduce their apartment standards.

All the recent reports on our governmental institutions have pointed out the need for public servants to be able to speak out and to question public policy when they think it’s going awry – this will prevent “groupthink” and all the problems that has created.

We must build a new culture that truly values openness, transparency and accountability and that allows public servants in exceptional cases, to bring to the public’s attention policy initiatives they consider are misguided. Our governing culture has too much deference to vested interests and not enough to the common good.

Kieran Rose is senior planner with Dublin County Council, chairperson of Glen and a commissioner of the Irish Human Rights and Equality Commission