Only surprise about Green Party farce is it happened so soon

The party prides itself on doing things differently. Doing them right would be better 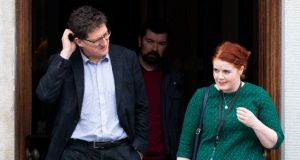 The Coalition has got through its first month. And if it keeps going in a similar steadfast vein this stable majority government should last until Christmas at the very least.

By any yardstick, the three-party administration has had a torrid July. It was bookended by the sacking of a Fianna Fáil minister at the start of the month and two Green Party TDs going rogue on Thursday night. In between there was mishandling of ministerial pay, the pandemic unemployment payment and the green list of “safe countries” to travel to.

The farce of the last day of the Dáil before summer recess typified it all. The session, which continued into the early hours of the morning, was like an endless loop of Curb Your Enthusiasm.

The angry, shouty part was provided by the Opposition over a change on speaking rights and speaking time in the Dáil that favoured the Government and larger parties. The cringe-inducing comedy was provided by the Greens, who went into collective shock after party whip Neasa Hourigan voted against the Government, and Minister of State Joe O’Brien abstained. The party’s communications team and advisers shut down. Its representatives (mostly) went to ground. For 12 hours, the strategy seemed to be: if we say nothing, perhaps people will forget it ever happened.

The only surprising thing about Hourigan’s decision was that it came so early in the Dáil term. It has been clear from February that she has been on a collision course with most of her Green colleagues in parliament on joining this coalition. To be fair to her, she has been consistent in that respect. Her objections to the Residential Tenancies and Evaluation Bill may have been well-grounded but that’s not the deal she signed up to.

A conversation is surely needed about the strictures of the Irish whip system. But it will not take place during the lifetime of the Government. Hourigan is going to have to take a decision (probably sooner rather than later) about where her political loyalties lie. Because the legislation we are seeing now is only a prelude to the horror show we will face in the next year, especially if there is a second wave of the pandemic.

Even though he abstained, O’Brien’s transgression was the more serious. He is the Minister of State for Community Development and Charities. TDs from other parties were scratching their heads at his decision to abstain. Unlike Hourigan, he supported the Government on the four amendments that came before the House and then abstained on the substantive vote, on the Bill itself.

Afterwards he sent out a Twitter thread outlining his objections. Fair enough. He finished it with this extraordinary line:

“I knew my vote was not going to defeat the Bill but I felt I also had to give a signal that how it was done was not good enough.”

That revived memories of a phenomenon in Irish politics called “Bertie the Bystander”. It occurred during the Fianna Fáil governments of the noughties. Bertie Ahern would be asked about an issue and he would say it was unsatisfactory and something should be done about it. The thing was that Ahern happened to be taoiseach at the time, in other words the guy who should be doing something about it.

O’Brien is not a backbencher like Hourigan. This was, after all, a Government Bill and he is a member of the Government and subject to its collective responsibility. If it is not good enough, that is – indirectly – his own fault.

His vote and slightly naive comments suggest he and his fellow Green TDs think they can take an a la carte approach to Government votes in the future. That’s not going to happen.

How would other parties react to this situation? It reminds me of the late, great Gaelic footballer Enda Colleran recalling to me an incident that happened when he was playing for the Galway minor team against Mayo in 1960.

The star player on the Galway team was having an off day but was still hogging the ball. The manager called him off the field. “This fellow had a big ego,” said Colleran “and was not happy at being called ashore. As soon as he hit the sideline, he started shouting for Mayo.”

And the upshot? “He never wore a maroon jersey again,” said Colleran.

If O’Brien was a member of one of the two coalition parties, or of Sinn Féin or Labour, he would be sitting on the backbenches when the Dáil returned in September. Instead, the Green parliamentary party held a late-night meeting and came up with a sanction for the two errant TDs that came straight out of the GAA and IRFU playbook. Suspensions are timed for the off season when there are no games. Ergo, the punishment becomes meaningless. So the two-month suspension of Dáil speaking rights for the tenancy Bill is really only two weeks, as the Dáil does not return until September 15th. It’s hardly going to have a chilling effect on other party TDs future behaviour. The Green Party prides itself on doing things differently. But doing things differently does not necessarily mean doing them right.

The incident and the Greens’ insipid handling of it reflects the party’s deep divisions and the weak position of party leader Éamon Ryan. It just seems enfeebled in government, unable to say “boo” to any critics, either internally or externally.

Perhaps this was a blip. That said, it is not a good portent for a Government that wants to survive a full term.